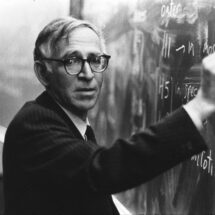 Aaron Klug joined the newly-built LMB in 1962, moving from Birkbeck College, London where he had worked with Rosalind Franklin on the structure of tobacco mosaic virus. He continued to work on this helical virus, and also on the structures of spherical viruses, establishing many of the basic rules governing their structure and self-assembly. His group was also the first to determine the structure of a tRNA, work which would later lead him to the analysis of RNA enzymes or ‘ribozymes’.

Arguably his most important contribution to scientific research was his painstaking development of crystallographic electron microscopy. This combines the techniques of electron microscopy and X-ray diffraction to recover three-dimensional structural information from two-dimensional electron micrographs. In this way, he and others were able to reveal the structures of complex biological materials not amenable to conventional X-ray crystallography alone. For this work, he received the Nobel Prize in Chemistry in 1982.

Aaron was also the discoverer of zinc-finger proteins, a class of proteins which bind specific DNA sequences by means of arrays of ‘fingers’, each of which interacts with a run of three or four base pairs. The modular nature of these proteins has made it possible to design synthetic proteins with a wide range of specificities, opening the prospect of targeted therapies for a wide range of diseases.