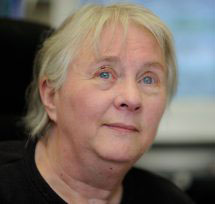 Linda Amos joined the LMB in 1968, having worked for a while at the Central Electricity Generating Board, modelling changes in nuclear reactor cores. She was recruited initially to write programs for the LMB’s FORTRAN computer. At the time, programs were being written for 3-D reconstruction from electron micrographs, and Linda collaborated with David DeRosier and Peter Moore on programs for helical particles and with Tony Crowther for spherical viruses. She also worked with Jan Mellema on the reconstruction of the spherical turnip yellow mosaic virus and with Tony and John Finch on the phages R17 and f2. In 1974, she began working on the structure of flagella microtubules with Aaron Klug and Richard Linck. She also collaborated with Ken Taylor and Hugh Huxley on the binding of myosin crossbridges to muscle thin filaments.

Linda’s interests then began to extend beyond programming and she started to work on links between the structures and functions of macromolecules. In 1971, she became a research student with Aaron Klug and in 1975 was awarded a PhD for ‘Image analysis of some symmetrical macromolecular structures’. In December 1978, Linda was appointed a Programme Leader in the LMB’s Structural Studies Division. Her group focussed on the structure of microtubules, including atomic details of the protein molecules from which they are assembled and those which they interact with to produce cell movement. Information was obtained by in vitro studies of purified native molecules and also protein domains expressed in bacteria. The group’s structural data came primarily from electron microscopy, combined with 3-D image reconstruction and labelling with probes such as specific antibodies or covalently-attached gold particles. The group made major contributions to the study of mechanisms of various members of the kinesin family of motor proteins, in collaboration with Rob Cross, at the Marie Curie Research Institute, Keiko Hirose, at NIAIR, Tsukuba, Jan, and Sharyn Endow, at Duke University, North Carolina.

Through work with her postdoc, and later independent LMB group leader, Jan Löwe and his group, Linda made seminal contributions to the discovery of archaeal and bacterial cytoskeletons, demonstrating most importantly that prokaryotes contain clear structural and functional homologues of actin and tubulin.

Linda also collaborated with Maria Spillantini and Enrico Magnani at the Cambridge Centre for Brain Repair and the LMB’s Michel Goedert to study the interaction of tau and dynactin and their binding to microtubules.

In recognition of her contribution to the field, Linda was elected a member of EMBO in 2003. She became a retired worker in 2009, when her group closed.