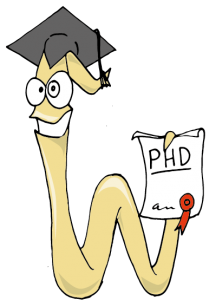 Caenorhabditis elegans is a small nematode worm, about 1mm long, which we use as a “model organism”.  A model organism is a non-human that is used in the lab to help scientists understand biological processes.

In nature, C. elegans is found on compost heaps, where it eats bacteria and fungi. These worms live for about seventeen days. They become adults when they are three days old, laying around 300 eggs. Like us, worms move, eat and sleep, and can sense touch, taste and smell. Although they have only 302 neurons (compared with our 100 billion), they are surprisingly clever. They use many different smells and tastes to find good food and avoid food that will make them sick. They can make complex decisions, such as whether to pay attention to sensory information that indicates food versus sensory information that indicates danger. Based on previous experience, they can learn, to change the way they behave in response to what their senses tell them.

Although C. elegans has only been used in the lab for the last sixty years, these small worms have been used to make big discoveries in biology! Read on to learn about the history behind the worms and how they continue to advance our knowledge of basic biology and human disease.

A brief history of worms at the LMB: establishing C. elegans as a model organism 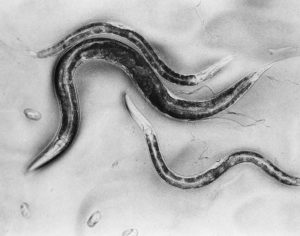 Did you know that research using C. elegans began in the 1960s at the Medical Research Council (MRC) Laboratory of Molecular Biology (LMB)? After spending years researching DNA and genetics, Sydney Brenner applied to the MRC for funding to establish research using this transparent nematode worm. He argued that it was a comparatively simple organism, with a nervous system, that was easy to grow in bulk and to study with a light microscope. 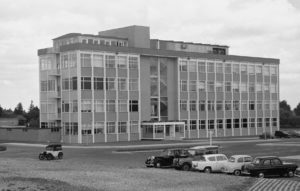 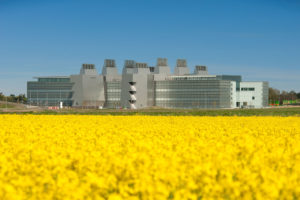 In the following two decades, LMB scientists played a central role in establishing C. elegans as a model organism and provided valuable resources that are still vital today. By following its development from a single cell to adult, they mapped the cell lineage of all 959 cells in C. elegans. Thanks to this effort, they were able to create a map of how all of the 302 neurons in the adult worm connect. This “connectome” is still a highly valued tool used by C. elegans scientists today. They also identified and characterised lots of mutations that affect normal development, leading them to decipher much of the apoptosis pathway, or genetically programmed cell death that results in the elimination of extra cells during development. Thanks to their pioneering work laying the foundations of C. elegans genetics, the first complete genome of a multicellular organism was C. elegans in 1998.

In 2002, Sydney Brenner, John Sulston, and Robert Horvitz were awarded the Nobel Prize in Physiology or Medicine for their work on the genetics of organ development and programmed cell death. Andrew Fire, who was a postdoc in Brenner’s group at the LMB, shared the 2006 Nobel Prize for Physiology or Medicine, for the discovery of RNA interference (RNAi).  In 2008, Martin Chalfie, who worked with Brenner and Sulston during his postdoctoral studies at the LMB, shared the Nobel Prize for Chemistry for his work using Green Fluorescent Protein (GFP) in C. elegans. 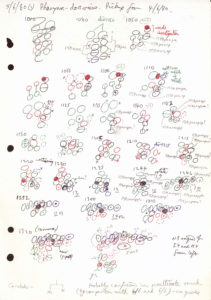 In his Nobel acceptance speech, Brenner said, “I want particularly to record the patient and generous support given to me by the Medical Research Council of Great Britain who allowed me to initiate and develop the research on C. elegans in the MRC Laboratory of Molecular Biology in Cambridge. Such long-term research could not be done today, when everybody is intent only on assured short term results and nobody is willing to gamble. Innovation comes only from the assault on the unknown.”

How do scientists use C. elegans to do research today?

Nearly 60 years after Brenner started working with C. elegans, it is now a well-established model organism – there are over 500 labs worldwide studying these worms! Many of Brenner’s original arguments in favour of using worms in the lab are still true; with their small size, short life cycle (approximately three days from egg to adult) and large number of offspring (nearly 300 eggs), we can grow large numbers very quickly. However, thanks to advances in genetics and molecular biology, these worms have been useful in unexpected ways.

Why are worms still a good model organism?

How do we do research in worms? 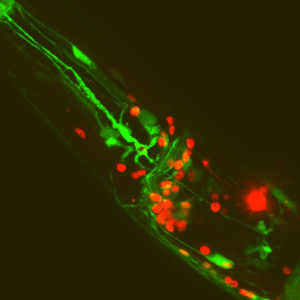 Years of study in labs all over the world have provided a fantastic toolkit of techniques.

Combining these strategies, scientists can determine in which cells a specific gene is expressed, which behaviours it contributes to, and what other genes it interacts with. This approach is particularly useful for family members of genes that contribute to biological processes in humans. Listed below are some examples of how nematode worms can contribute to our understanding of human health and diseases. 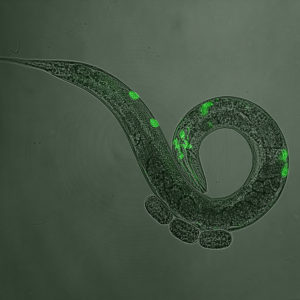 Green fluorescent protein marks neurons expressing serotonin and dopamine. These neurotransmitters modulate speed of worms on food, how fast they eat, and the rate of egg-laying.

In response to sensory information, and using our past experiences, we change our behaviour thanks to long-range messenger molecules (“neurotransmitters”). Worms use the same neurotransmitters to regulate their behaviour too. When they encounter good food, for example, they slow down and lay eggs, a process that requires dopamine. Dopamine plays a major role in drug addiction, schizophrenia, ADHD and Parkinson’s disease. So understanding the signalling pathways that underlie these worm behaviours can help us to understand the signalling pathways involved in human conditions (and how to treat them). Serotonin is another example; in humans it is involved in depression and anxiety, whereas in worms it controls egg laying and feeding rate (they lay more eggs and eat faster if you give them Prozac!).

Around half of deafness cases are hereditary, caused by changes in the sequence of particular genes. Studying families with deaf individuals has led to the identification of many of the genes responsible. Many of these genes have very similar counterparts in worms, so we can use worms to try to understand how they cause deafness, and what role these genes play in healthy individuals. Although worms can’t hear, hearing relies on the detection of vibrations, which is very similar to the detection of touch. Worms respond to touch by moving in the opposite direction, so, if the worm gene functions in touch, this provides us with an observable behaviour to assay.

This worm is glued in position, ready to be tested for its response to touch, using the rounded needle visible to the right.

A neuron from the same worm, expressing a colour-changing calcium indicator, allowing us to follow its activity in response to touch.

Worm cells age in similar ways to human cells, so we can use them as a disease model. The short life cycle of C. elegans means that we can quickly observe the effects of aging. We can put genes and proteins that cause human age-associated illnesses (e.g. Alzheimer’s, Huntingdon’s or Parkinson’s disease) into worms, and study why they lead to disease in aging animals. We can genetically manipulate worms so that they become less susceptible to illness, and then investigate the reasons why. Such studies identified insulin as a key factor influencing how we age, and how likely we are to develop diseases of ageing.

a ‘young’ adult worm with an ageing-related protein tagged with a fluorescent protein. It is distributed throughout the body

an ‘old’ adult worm where the same protein has aggregated

Because worms are cheap and easy to grow in large numbers, they are ideal for large-scale screens. Screening for mutants with a particular defect, then identifying the gene, can help us to understand human diseases better. Screening for new molecules that correct this defect can identify new drugs too!