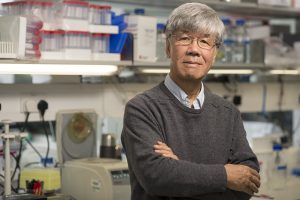 The Nagai lab was interested in the structure and function of the eukaryotic splicing machine: the spliceosome. They a number of crystal and NMR structures of spliceosome components, and elucidated high resolution cryo-EM structures of the entire spliceosome at different stages of catalysis. These structures provide a framework for dissecting the mechanism of pre-mRNA splicing.

Kiyoshi passed away in September 2019 and you can read more about his life and work in his LMB obituary and some personal reflections published by Cell, NSMB and The RNA Society.

There is also a review article in Crystals written by Adelaine Leung, a former PhD student in Kiyoshi Nagai’s lab and co-authored by other former Nagai lab members. It is a dedication to their friends and mentors Kiyoshi Nagai and Chris Oubridge, who are sorely missed. It summarises the lab’s vision, immense amounts of work and sometimes crazy ideas to unravel and understand the mechanism of splicing using X-ray crystallography before the Cryo-EM revolution.

The Royal Society Biographical Memoir of Kiyoshi Nagai was published in 2022. Authors Andy Newman and Ben Luisi discuss Kiyoshi’s scientific career, including how he came to join the LMB and his longstanding collaboration with Chris Oubridge.