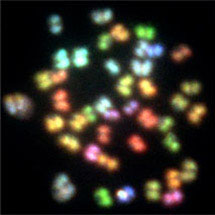 Angelika Amon, who is Professor of Biology at the David Koch Institute for Integrative Cancer Research at the Massachusetts Institute of Technology (MIT), will give the 2012 Francis Crick Lecture on Wednesday 15th February at 4.15pm in the LMB’s Max Perutz Lecture Theatre. The lecture is open to anyone in the local area who is interested in attending.

Angelika graduated in biology from the University of Vienna, and also completed her PhD there. In 1996 she set up her lab at the Whitehead Institute, before moving to MIT in 1999. In 2000 she was appointed as a Howard Hughes Medical Institute Investigator.

The focus of Angelika’s research is to uncover the networks that regulate the accurate segregation of chromosomes during cell division. Cell division is a tightly regulated event, but serious errors can occasionally occur. The result from such errors, cells with too few or too many chromosomes, is called aneuploidy. This condition is frequently associated with death and disease in humans.

The title of the 2012 Francis Crick Lecture is “Consequences of Aneuploidy.”

Aneuploidy is defined as a chromosome number that is not a multiple of the haploid complement. Almost a century ago, Theodor Boveri suggested a possible link between aneuploidy and cancer, a disease associated with high proliferative ability. On the other hand, aneuploidy at the organismal level is associated with severe developmental abnormalities and death in all species analyzed to date. These results raise an interesting conundrum. How is it possible that the presence of a single additional chromosome is associated with developmental defects characterized by growth restriction, yet in the context of cancer severe karyotypic abnormalities exist in cells with high proliferative abilities? To shed light on the relationship between aneuploidy and cancer we determined how aneuploidy affects the physiology and differentiation of normal cells. We generated 20 strains of budding yeast and 4 primary mouse cell lines bearing an extra copy of one or more chromosomes. The analysis of these cell lines revealed chromosome specific phenotypes and traits shared by most aneuploid cell lines and strains. The importance of these characteristics in tumor evolution and development of new treatment strategies will be presented.