Home > LMB News > 2013 Francis Crick Lecture to be given by Stanley B. Prusiner 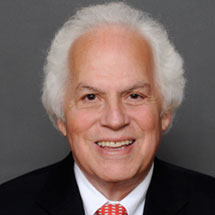 Stanley B. Prusiner, Director of the Institute for Neurodegenerative Diseases and Professor of Neurology at the University of California, San Francisco, will give the 2013 Francis Crick Lecture on Friday 11th April at 3.00pm in the LMB’s Max Perutz Lecture Theatre.  The lecture is open to anyone in the local area who is interested in attending.

Stanley completed his medical studies at the University of Pennsylvania in 1968.  He began his residency in the Department of Neurology at the University of California San Francisco in 1972. It was during this time that he became interested in “slow virus” diseases. In 1974 he was offered an assistant professor position and he began to set up a laboratory to study scrapie. His work led to a publication in 1982 in which he introduced the term “prion” derived from the words protein and infectious.

The main focus of his current research is in developing therapeutics aimed at halting neurodegeneration in Alzheimer’s, Parkinson’s, fronto-temporal dementias and Creutzfeldt-Jakob disease.

Stanley received the Nobel Prize for Physiology or Medicine in 1997, “for his discovery of Prions – a new biological principle of infection”.

The title of the 2013 Francis Crick Lecture is “Prions Causing Neurodegeneration: A Unifying Etiology and the Quest for Therapeutics”.

Mounting evidence argues that prions feature in the pathogenesis of many, if not all, neurodegenerative diseases.  Such disorders include Alzheimer’s, Parkinson’s, Lou Gehrig’s and Creutzfeldt-Jakob diseases as well as the fronto-temporal dementias.  In each of these illnesses, aberrant forms of a particular protein accumulate as pathological deposits referred to as amyloid plaques, neurofibrillary tangles, Lewy bodies, as well as glial cytoplasmic and/or nuclear inclusions.  The heritable forms of the neurodegenerative diseases are often caused by mutations in the genes encoding the mutant, prion proteins that accumulate in the CNS of patients with these fatal disorders.  The late onset of the inherited neurodegenerative diseases seems likely to be explained by the protein quality control systems being less efficient in older neurons and thus, more permissive for prion accumulation.  To date, there is not a single drug that halts or even slows one neurodegenerative disease.