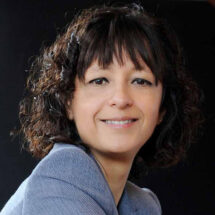 Emmanuelle Charpentier will give the 2015 Francis Crick Lecture on Friday 2nd October 2015 at 15:15 in the Max Perutz Lecture Theatre at the LMB. The lecture, entitled “The transformative CRISPR-Cas9 genome engineering technology: lessons learned from bacteria” is open to anyone in the local area who is interested in attending.

Emmanuelle is a director at the Max Planck Institute for Infection Biology, Berlin, Head of the Department of Regulation in Infection Biology, Professor at the Hannover Medical School, Germany and Visiting Professor at the Laboratory for Molecular Infection Medicine Sweden, Umeå University. Her research programme focuses on fundamental mechanisms of regulation in processes of infection and immunity with a focus on Gram-positive bacterial pathogens. Her group wants to understand how RNAs and proteins coordinate to modulate gene expression and biological processes in bacterial pathogens.

Emmanuelle studied biochemistry, microbiology and genetics at the University Pierre and Marie Curie in France, and she obtained her PhD in microbiology for her research performed at the Pasteur Institute. She then continued her work in the United States where she held Research Associate positions at the Rockefeller University, New York University Langone Medical Center and the Skirball Institute of Biomolecular Medicine and at St Jude Children’s Research Hospital. Emmanuelle returned to Europe to establish her own research group at the Max F. Perutz Laboratories of the University of Vienna in Austria where she habilitated in the field of microbiology before taking up her current positions. She is also Docent in the field of Medical Microbiology at Umeå University.

Emmanuelle has been awarded a number of prestigious prizes, including the Breakthrough Prize in Life Sciences (2014) and the Louis-Jeantet Prize for Medicine (2015). She has held the Alexander von Humboldt Professorship, since 2014. Emmanuelle is co-inventor and owner of seminal intellectual property comprising the CRISPR-Cas9 technology, and co-founder of CRISPR Therapeutics and ERS Genomics.

The RNA-programmable CRISPR-Cas9 system has recently emerged as a transformative technology in biological sciences, allowing rapid and efficient targeted genome editing, chromosomal marking and gene regulation in a large variety of cells and organisms. In this system, the endonuclease Cas9 or catalytically inactive Cas9 variants are programmed with single guide RNAs (sgRNAs) to target site-specifically any DNA sequence of interest given the presence of a short sequence (Protospacer Adjacent Motif, PAM) juxtaposed to the complementary region between the sgRNA and target DNA.

Originally, CRISPR-Cas is an RNA-mediated adaptive immune system that protects bacteria and archaea from invading mobile genetic elements. Short crRNA (CRISPR RNA) molecules containing unique genome-targeting spacers guide Cas protein(s) to invading cognate nucleic acids to affect their maintenance. CRISPR-Cas has been classified into three main types and further subtypes. CRISPR-Cas9 originates from the type II system that has evolved unique molecular mechanisms for maturation of crRNAs and targeting of invading DNA, which my laboratory has identified in the human pathogen Streptococcus pyogenes. During the step of crRNA biogenesis, a unique CRISPR-associated RNA, tracrRNA, base pairs with the repeats of precursor-crRNA to form anti-repeat-repeat dual-RNAs that are cleaved by RNase III in the presence of Cas9, generating mature tracrRNA and intermediate forms of crRNAs. Following a second maturation event, the mature dual-tracrRNA-crRNAs guide Cas9 to cleave cognate target DNA and thereby affect the maintenance of invading genomes. We have shown that Cas9 can be programmed with sgRNAs mimicking the natural dual-tracrRNA-crRNAs to target site-specifically any DNA sequence of interest. I will discuss the biological roles of CRISPR-Cas9, the mechanisms involved, the evolution of type II CRISPR-Cas components in bacteria and the applications of CRISPR-Cas9 as a novel genome engineering technology.

The Francis Crick Lecture is named in honour of LMB Nobel Laureate Francis Crick. It is one of a series of named lectures organised by the LMB to be given by eminent scientists from around the world.

Francis Crick was born in 1916 in Northampton. He studied physics at University College London. His PhD work was interrupted by World War II, during which he worked on the design of acoustic and magnetic mines for the British Admiralty. In 1949 he joined Max Perutz’s MRC Unit in Cambridge. It was here that he helped solve the structure of DNA and initiated work on the genetic code. In 1976 he moved to the Salk Institute, California. He immersed himself in trying to define how we are aware of things –consciousness. He continued with this until he died, defining the important goal of trying to find a neuronal correlate of consciousness. He died in San Diego on 28 July 2004. 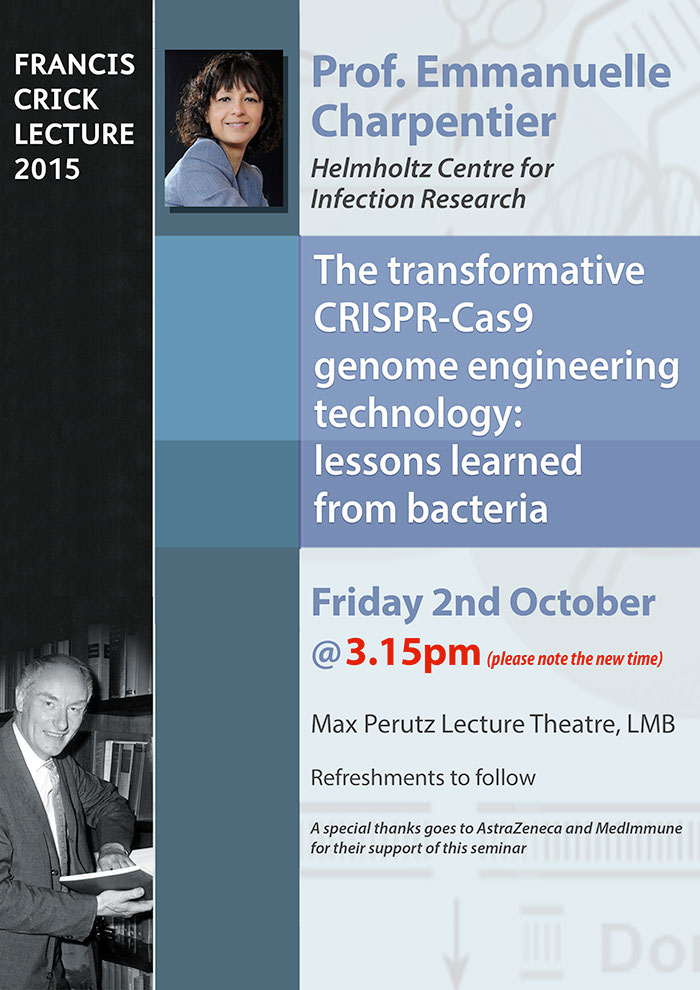