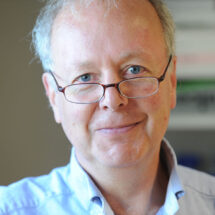 Adrian Bird will give the 2016 Francis Crick Lecture on Tuesday 16th February 2016 at 11.30am in the Max Perutz Lecture Theatre at the LMB. The lecture, entitled “DNA Sequence and the Epigenome Entwined” is open to anyone in the local area who is interested in attending.

Adrian is Buchanan Professor of Genetics at the University of Edinburgh. His group’s research focuses on the basic biology and biomedical significance of DNA methylation. His research team identified CpG islands as gene markers in the vertebrate genome and discovered proteins that read the DNA methylation signal to influence chromatin structure. Mutations in one of these proteins, MeCP2, cause the autism spectrum disorder Rett Syndrome. Adrian’s group also established a mouse model of Rett Syndrome and demonstrated that advanced Rett-like symptoms in mice can be “cured” by putting back a functional MeCP2 gene.

Adrian’s awards include the Louis-Jeantet Prize for Medicine (1999) and the Gairdner International Award (2011). He was elected a fellow of the Royal Society in 1989.

“Epigenome” refers to the panoply of chemical modifications borne by DNA and its associated proteins that locally affect genome function. Patterns of epigenomic marking are often thought to reflect external constraints including disease and the environment, but DNA sequence is also a potential influence. Evidence that sequence-specific DNA binding proteins mould and interpret the epigenome will be discussed. Experimental support for the notion that gross features of DNA sequence are read as signals to influence the epigenome and gene activity will also be presented.

The Francis Crick Lecture is named in honour of LMB Nobel Laureate Francis Crick. It is one of a series of named lectures organised by the LMB to be given by eminent scientists from around the world.

Francis Crick was born in 1916 in Northampton. He studied physics at University College London. His PhD work was interrupted by World War II, during which he worked on the design of acoustic and magnetic mines for the British Admiralty. In 1949 he joined Max Perutz’s MRC Unit in Cambridge. It was here that he helped solve the structure of DNA and initiated work on the genetic code. In 1976 he moved to the Salk Institute, California. He immersed himself in trying to define how we are aware of things –consciousness. He continued with this until he died, defining the important goal of trying to find a neuronal correlate of consciousness. He died in San Diego on 28 July 2004. 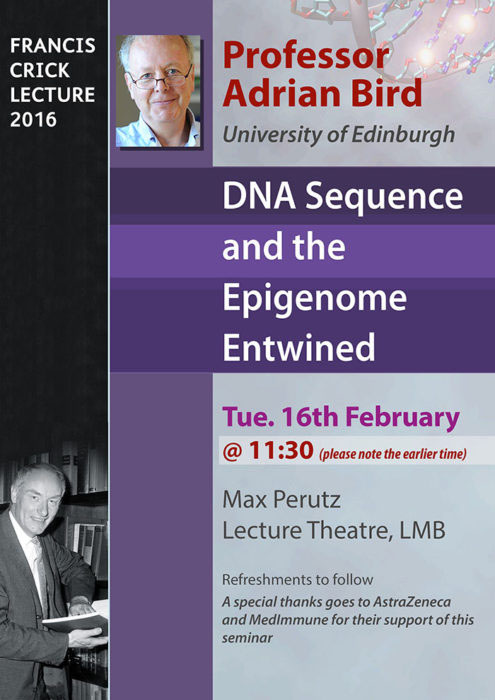