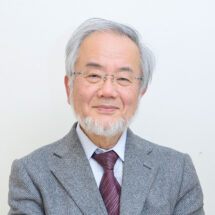 Professor Yoshinori Ohsumi will give the 2016 Milstein Lecture on Friday 9th September 2016 at 12 noon in the LMB’s Max Perutz Lecture Theatre. The lecture, entitled “Looking back on my 28 years of autophagy research” is open to anyone in the local area who is interested in attending.

Yoshinori is currently Honorary Professor and the leader of the Cell Biology Unit at the Frontier Research Center of the Tokyo Institute of Technology. He has been awarded a number of prizes and awards, including most recently the Dr. Paul Janssen Award for Biomedical Research (2016).

The ground-breaking work on autophagy in his lab saw the identification of several genes essential for autophagy. His work showed that autophagy is one of the most basic functions in cells of many plants and animals. Yoshinori continues to study autophagy at the molecular level to learn more about its mechanism.

Yoshinori obtained his Ph.D. from the University of Tokyo. He completed a postdoctoral fellowship at The Rockefeller University in New York working on E. coli before switching to work on mammalian cells and developmental biology, finally choosing to study DNA duplication in yeast. He returned to the University of Tokyo as a junior research associate and then lecturer in the Faculty of Science. In 1988 he was appointed Associate Professor and set up his own research lab and began to observe intracellular vacuoles of yeast. In 1996 he transferred to the National Institute for Basic Biology in Okazaki, where he continued to elucidate the functions of the proteins that are encoded by the ATG genes. Yoshinori was appointed Professor at the Frontier Research Center, Tokyo Institute of Technology in 2009, before becoming Honorary Professor in 2014.

More than a half-century has passed since C. de Duve coined the term “autophagy” for the degradation process of cytosolic proteins and organelles in the lysosome. After the discovery of autophagy by electron microscopy, for many years studies at a molecular level failed to yield any significant advances in our understanding of this fundamental pathway of degradation. Now, after a long gestation period, autophagy has become a major field of research in biology and is expanding day by day. First I will present a brief overview of my autophagy research. I used to study the yeast vacuole biochemically as a storage compartment, and found active transport systems and novel proton-pump, v- type ATPase, on the membrane. In 1988, I decided to next look into the lytic function of the yeast vacuole and found intensive autophagy induced by nutrient starvation using a light microscope. Soon afterwards, a genetic effort to address the poorly understood machinery of autophagy led to the discovery of many autophagy-defective mutants by morphological criteria. The ATG genes identified in this process can be categorized into unique groups of proteins exclusively involved in autophagosome formation. Our primary objective was to understand the unique membrane dynamics during autophagy by structural and functional analyses of the 18 Atg proteins essential for starvation-induced autophagy. These Atg proteins collectively assemble to form a prevacuolar dot structure, the PAS, and function to generate a unique isolation membrane. Recent progress in our understanding of the molecular mechanism of the early stages of PAS formation will be presented.

Since our strategy for screening autophagy-defective mutants was based upon morphological observation under nitrogen starvation, mutants of essential genes and selective autophagy were not detected in this initial analysis. Therefore, the description of selective forms of autophagy has become a subsequent key subject in autophagy research. This inquiry reflects the diverse modes of selective-type of autophagy, even in a model organism as apparently simple as yeast. Our studies in selective autophagy in yeast will be discussed.

Thirdly, we recently showed that plenty of RNA is degraded via autophagy under starvation conditions. Autophagy is therefore able to degrade not only proteins but also various cytoplasmic constituents. Metabolites derived from the degradation process may exert a large influence on cellular metabolism, which means degradation is not simply the inverse reaction of synthesis. The final steps of autophagy, degradation and transport of products to the cytoplasm, must therefore be uncovered to obtain a complete understanding of the process of autophagy. The historical landmarks underpinning the explosion of autophagy research are discussed with a particular focus on the contribution of yeast as a model organism.