Jack Szostak will give the 2017 Francis Crick Lecture on Thursday 7th September at 4pm in the LMB’s Max Perutz Lecture Theatre. The lecture, entitled “The Surprising Chemistry of Nonenzymatic RNA Replication”, is open to anyone in the local area who is interested in attending.

Jack is Professor of Genetics at Harvard Medical School and Professor of Chemistry and Chemical Biology at Harvard University. He is also an Investigator at the Howard Hughes Medical Institute. His lab studies the chemical and physical processes that facilitated the transition from chemical evolution to biological evolution on the early earth. To explore these processes, the lab is trying to build a synthetic cellular system that undergoes Darwinian evolution.

Jack completed his undergraduate studies at McGill University, aged just 19 and went on to obtain a PhD at Cornell University. He remained there for a post-doctoral position in which he worked on yeast, conducting recombination studies to increase transformation efficiency. Jack then started his own group at the Sydney Farber Cancer Institute at Harvard Medical School, where he focussed on the study of telomeres and telomerase in yeast. In 1984 Jack moved his lab to the Department of Molecular Biology at the Massachusetts General Hospital where his work began to take on a new direction – the study of ribozymes. This evolved into an interest in fundamental questions related to the origin of life, including studies of membranes and now the chemical replication of RNA.

Jack won the Nobel Prize in Physiology or Medicine in 2009, along with Elizabeth Blackburn and Carol Greider, “for the discovery of how chromosomes are protected by telomeres and the enzyme telomerase”.

The RNA genomes of the first cells are thought to have emerged from the nonenzymatic replication of short RNA strands, which allowed the first ribozymes to evolve, followed by the evolution of ribozyme catalysed replication. However, no process for the replication of a nucleic acid genome, independent of evolved enzymatic machinery, has yet been described. Jack will discuss his lab’s recent progress toward the realisation of an efficient and accurate system for the chemical replication of RNA. Mechanistic and structural studies have led to new chemical replication systems that are both more prebiotically plausible and more accurate, efficient, and general. 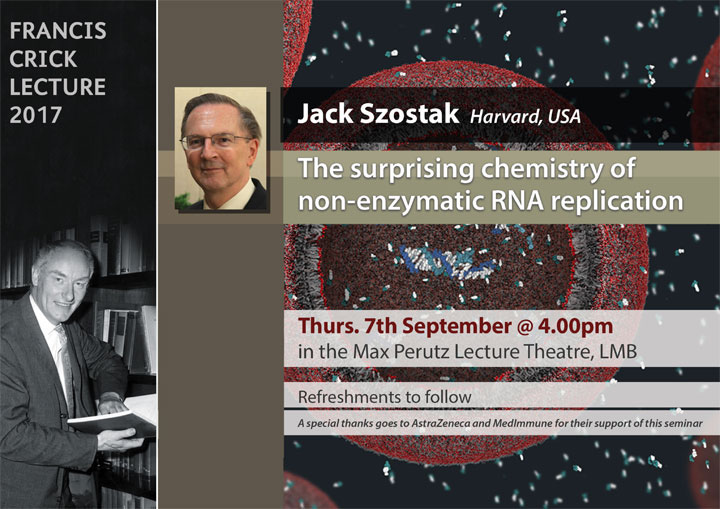