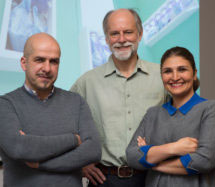 The LMB has appointed 30 Bird and public works as LMB Artists-in-Residence starting in April 2015. They are a collaborative team made up of a local performance company led by Mehrdad Seyf (30 Bird) and a participatory art and architecture practice led by Torange Kohnsari (public works). These ground breaking artists will engage with staff at the LMB to inspire new perspectives and understanding of the LMB’s research, both amongst people at the LMB, and the general public.

Mehrdad and Torange were selected by the LMB’s Public Art Steering Panel, made up of LMB staff and external advisors, who were impressed by their enthusiasm about the LMB’s science, and their creative engagement with the brief.

“We were attracted to this residency because it provided us with the opportunity to bring together art and science in an innovative and interesting way, challenging the more traditional notions of public art”, said Mehrdad Seyf.

He added, “the research at the LMB involves work at the minutest detail, with the aim of extracting information that influences life on earth on an epic scale. It is the marriage of these two, the minute and the epic, the scientific research deep within organisms and its physical and social consequences that make the research at the LMB work so exciting to us.”

During a launch event at the LMB, Mehrdad and Torange discussed their work and shared some of their ideas for the residency. In the first part of the project they will run specific hosting events for staff and invited guests, to discuss key concepts and shape the direction of the art.

Hugh Pelham, LMB Director, said “We are looking forward to the experience of interacting with the artists and seeing how they interpret our science in a new and different way.

The LMB residency is the first project in the Artist-in-Residence programme that forms part of the Cambridge Biomedical Campus (CBC) Public Art Programme. The Programme is led and funded by property developers Countryside Properties and Liberty Property Trust under the s106 agreement with Cambridge City Council to deliver public art across the CBC expansion land. The Programme is curated and co-ordinated on the developers’ behalf by the cultural agency, Futurecity.