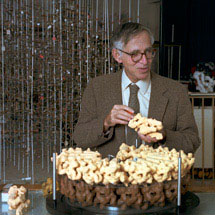 In the Prefatory Article for this year’s Annual Review of Biochemistry, Sir Aaron Klug describes his extraordinary life and scientific achievements. The Prefatory Article honours one scientist each year by publishing an autobiography detailing their life’s work. This year, it called attention to Aaron’s incredibly varied and productive career.

Aaron’s work on structural molecular biology began with Rosalind Franklin, who is most famous for her role in determining the structure of DNA, in 1953 at Birkbeck College. There, he took up the study of the Tobacco Mosaic Virus (TMV), a project that he continued in Cambridge after moving to the newly formed LMB in 1962. Aaron credits Franklin with providing the example that he has followed throughout his career, namely: “tackling large and difficult problems.”

Nearly 50 years later and at the age of 84, Aaron has won a Nobel Prize, served as Director of the LMB for ten years and as President of The Royal Society for five years. However, he remains at the LMB and continues to address “difficult problems,” as evidenced by his reviews of his recent work, also published this year in Annual Review of Biochemistry and in Quarterly Reviews of Biophysics.
Aaron’s work shows that innovative basic research on the “big questions” can spawn unforeseen applications and technologies. While working on the structure of TMV and the mechanism of TMV assembly, he developed the tools to create 3D reconstructions of macromolecular complexes from electron micrographs. Aaron used this technique and X-ray crystallography, to solve the structures of TMV and other viruses, and of the nucleosome core, which is the basic building block of chromatin. It was for this structural work, and for the 3D imaging techniques that made it possible, that Aaron won the Nobel Prize for Chemistry in 1982.

The 3D micrograph reconstruction method developed by Aaron has since been used to determine the structures of countless molecules, and similar approaches have led to the development of CT scans, which have become an invaluable medical diagnostic tool. Aaron’s group also discovered the zinc finger protein fold, a DNA-binding protein motif. He has recently been working to develop a gene therapy technique that uses zinc fingers to specifically activate, repress or replace genes involved in human diseases and disorders. This work has been carried out at Sangamo Biosciences, which acquired the MRC spinout company Gendaq Ltd in 2001. It represents an important contribution to clinical medicine that began with Aaron’s quest to solve a “large and difficult problem.”