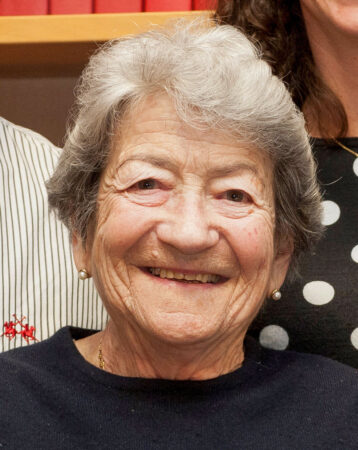 Celia Milstein was born in 1928 and came to Britain from Argentina in the late 1950s with César, her husband, and they worked together on early aspects of antibody diversity. Although Celia only worked at the LMB briefly in 1980 (as a visitor with Terry Rabbitts), she was known to us foremost as a strong supporter of the LMB and a personal friend to many people here. She actively supported the students and scientists who received a Milstein Fund Studentship or Fellowship, named in honour of her husband who died in 2002, which enabled young scientists from South America to undertake research at the LMB.

Celia was a Principal Scientific Officer at ARC Institute of Animal Physiology, Babraham and had been a very active member of the Cambridge academic and social scenes for many decades. Her story is vividly described in Kathy Weston’s book, Ahead of the Curve, on women at the LMB. She died on 19 November 2020, aged 92.

Celia’s niece, Ana Fraile, and Peter Lawrence, friend and LMB Alumnus, have written an obituary about Celia, which they have kindly given us permission to share.

Great discoveries “pop up, like Puck, in unexpected corners”. Even so, an amazing number of such discoveries have been made in one laboratory, the MRC Laboratory of Molecular Biology (LMB) in Cambridge and, of these, none have had more medical consequences than the determination of the structure of DNA and the invention of monoclonal antibodies. Monoclonal antibodies are already used to an astounding extent in both treatment and diagnosis of diseases, including cancers, they have already saved innumerable lives and relieved untold suffering. The Nobel Prize of 1984 credited this last discovery to César Milstein and Georges Köhler, but there are others who deserve much credit, particularly our beloved friend and relation, Celia Milstein (née Prilleltensky), who died in Cambridge on November 19 2020 aged 92.

Celia grew up on the outskirts of Buenos Aires in a Jewish family, immigrants from the Ukraine who spoke Yiddish. She recalled her childhood as full of beauty. These early memories were a sustaining resource. Thus, in spite of having lost her mother when a young child, she managed to become a strong, determined and free woman with adventurous, liberal and radical ideas. All these characteristics made her a soulmate with César. They were both chemistry students in the University of Buenos Aires, fell in love and married in 1953. They took a year off to backpack in Europe and then returned to Argentina to finish their studies. They emigrated to England in 1958 for further education. They went home in 1961 only to meet political threats and interference. They decided to return to Cambridge. This to-ing and fro-ing meant Celia had to sacrifice her PhD but was employed in the Department of Biochemistry in Cambridge where she took a Master’s degree.

Celia and César ignited and sustained a fire together that warmed and lit up the lives of their many and massively diverse friends. They shared so many passions, science first and then nature, as well as the arts, music and theatre. Peter Lawrence first met César in the LMB and only got to know Celia when he met them by chance in London at the theatre, which was surprisingly often. Celia was a multidimensional treasure. She was interested in everything, took several language courses at once. She played her piano, she took adventurous long journeys around the world in her 70s and 80s, she read. She was always kind, generous and sympathetic.  She inspired and amazed all our theatre friends by her energy, physical and intellectual, her sense of fun, her wide interests. She made all of us less fearful of old age, and stronger to challenge the pitfalls of life, advising us all to keep trying and never give up.

Her energy gave the stability, the love, the support that a great scientist like César needed, to work for decades with intensity and ingenuity. Celia and their relationship was a constant. Many sick people have now and will have in the future deep and ever-present reasons to be grateful to both of them.

There is a publicly available film about César, his life with Celia and his science. https://vimeo.com/pulpofilms/unfueguito