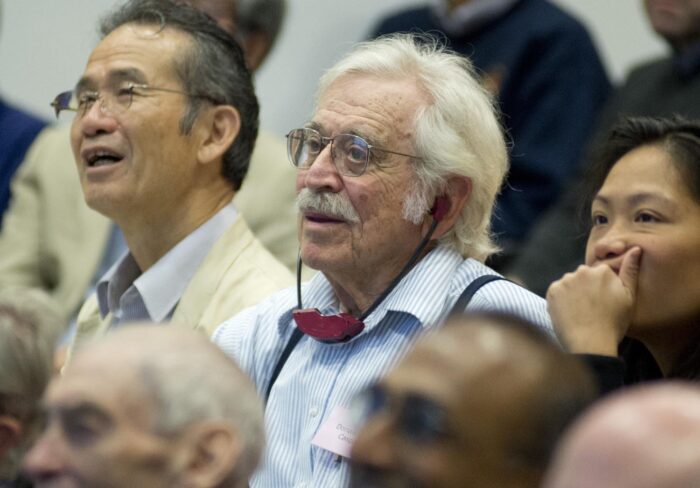 Don Caspar first came to the MRC Unit for the Study of the Molecular Structure of Biological Systems (now the LMB) as a Postdoctoral Fellow in 1955. He would become a frequent scientific worker at the Lab over the next 20 years and remained a friend and scientific colleague to many.

In 2014, he attended the LMB Alumni Symposium: Molecular Biology at 50 and Beyond, in the recently opened new LMB building, and recounted his time at the LMB in a bio-sketch for the symposium booklet:

“It was Francis Crick who was responsible for my coming to the Cambridge MRC Unit for the Study of the Molecular Structure of Biological Systems in September, 1955 to record some single crystal virus diffraction patterns, which he had asserted could test his theory with Jim Watson that “spherical” viruses should have cubic symmetry (tetrahedral, octahedral or icosahedral). Crystallographically forbidden five-fold symmetry was not anticipated; but ten smudges observed in the continuous transform of a fortuitously aligned, accidentally dried Bushy Stunt Virus crystal was the clue to recognising non-crystallographic icosahedral symmetry axes in my proper precession photographs from their “spikes of high intensity” (which Max Perutz had named for me). Optical analogue transforms from model icosahedral masks, recorded with Bragg’s pre-laser diffractometer in the vacant elevator shaft of the Cavendish Austin Wing, confirmed how the intensity spikes in the crystal-sampled transform marked the symmetry axes.

Exploring implications of the icosahedral virus symmetry I had discovered kept me returning to the MRC Lab for the next 20 years; from 1965-1975 I had a small desk at the back of Aaron Klug’s LMB office for my summer visits, nominally to work on a description of my Buckminster Fuller-inspired “tensegrity” models, which provided a basis for our 1962 quasi-equivalence theory of virus construction. My promised report on quasi-equivalence revisited finally appeared in 1980.”

In 1958, Don established the Laboratory for Structural Biology at the Children’s Cancer Research Foundation, Boston Children’s Hospital, Massachusetts. The lab moved to Brandeis University in 1972, and in 1994 Don moved to the Institute for Molecular Biophysics, Florida State University. Don died on 27 November 2021, aged 94.