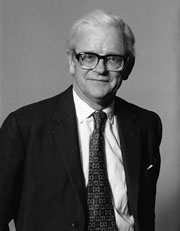 John was born in Oxford in 1917. His father was a climatologist, his mother an art historian. John was educated at the Dragon School, Oxford and then Clifton College, Bristol. It was at Clifton that John’s interest in science developed, with outstanding teachers in chemistry, physics and mathematics influencing him. In 1936, John came to Cambridge as a student, graduating with First Class Honours in Chemistry in June 1939.

John had just begun research work in Cambridge, on reaction kinetics, when it was interrupted by the outbreak of the Second World War. He was recruited to the Air Ministry Research Establishment, where he worked on oscillators and aerials for early radar applications. In 1941, he moved into operations research, with postings in the Middle East and South-East Asia, rising to the rank of Wing Commander. John would continue to be involved in defence matters after the War. In 1962, he was appointed Deputy Scientific Advisor to the Ministry of Defence.

During the War, John made a number of contacts that would determine his post-war scientific career, most notably the crystallographer J D Bernal. Bernal explained to John that to understand life it was necessary to understand the structure of proteins, and suggested that John should contact Max Perutz at the Cavendish when he returned to England. On his way back home, he visited Linus Pauling in the USA, who echoed Bernal’s comment, and John was now determined to work on protein structure.

John arrived at the Cavendish to work with Max in 1945. For his PhD thesis, John began work on an X-ray diffraction study of the differences between foetal and adult sheep haemoglobin. In 1947, Max and John’s work was under threat due to lack of funding. At the suggestion of David Keilin, Head of the Molteno Institute, an approach was made to Sir Edward Mellanby, Secretary of the Medical Research Council (MRC). He supported the work and in October 1947 the MRC Unit for the Study of the Molecular Structure of Biological Systems (later to become the MRC Laboratory of Molecular Biology) was established. The aim of the unit was to elucidate the chemical structure of proteins. To do this, X-ray crystallography seemed to be the only technique capable of succeeding in determining the structure of molecules as large and complex as proteins, but it was not without problems. Together Max and John would solve these problems and become pioneers in the field of protein crystallography.

John started work on the structure of myoglobin, the muscle protein that stores oxygen. Although similar to haemoglobin, myoglobin is a quarter of the size. John’s first problem was to make crystals large enough to diffract well, initial use of horse protein proved difficult. He then realised that diving mammals were rich in myoglobin, as this was used as a temporary oxygen store. After trying various sources he began to get good results from sperm whale myoglobin. At the same time, Max was solving the phase problem of X-ray crystallography: how the undulations of the phases of the waves are in and out of step with one another. Without knowing these, it is impossible to calculate the exact positions of the crystals planes, and thus where the atoms are situated. Max applied the technique of isomorphous replacement: attaching heavy metal atoms to crystals, which scatter X-rays strongly and provide a set of reference points in the diffraction pattern. John experimented with various heavy metal atoms to find ones that would ‘stick’ to myoglobin.

One of the other key developments John was involved in was the use of EDSAC, the Cambridge University electronic computer. In collaboration with John Bennett, they produced the first-ever program for computing a Fourier Summation for X-ray structure analysis. Before this, the work was done by-hand. Thus, the development of protein crystallography would go hand-in-hand with the development of the electronic computer.

In 1958, after 12 years of research, John produced the first three-dimensional structure of a protein: that of myogolobin. It consisted of a twisted helical chain folded up to make a small hollow in which the iron atoms sit. The discovery of this helped Max reveal the structure of haemoglobin the following year, and their technique would open up the world of elucidating protein structures. John and Max were awarded the Nobel Prize for their work in 1962.

By this time, John was already moving away from research work. A meticulous organiser, he had long been interested in the administration and organization of science. He was instrumental in setting up the European Molecular Biology Organisation (EMBO) and the European Molecular Biology Laboratory (EMBL) for which he was project leader and first Director-General. In 1959, he founded the Journal of Molecular Biology, and was editor-in-chief until 1987. In 1981, John returned to Oxford as President of St John’s College, where his diplomatic skills, artistic and cultural tastes and formidable intellect were much appreciated by the Fellows and students.

John was appointed CBE in 1963 and knighted in 1974. He was a Fellow of the Royal Society and an Honorary Foreign Member of many national academies. John died in Cambridge on 23 August 1997, aged 80.