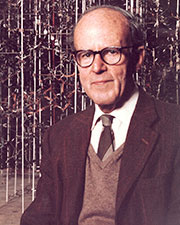 In 1936, Max Perutz arrived at the Cavendish Laboratory in Cambridge, to work in the field of X-ray crystallography. This move would lead to him becoming a pioneer in the new field of molecular biology, co-founding a world-class research laboratory and developing a technique to unlock the structures of proteins.

Max Ferdinand Perutz was born in Vienna on 19 May 1914. His father owned a small textile factory and his mother also came from a textile-manufacturing family. Max attended Theresianum, an elite school in Vienna, where his teacher sparked his interest in chemistry. He then went on to study chemistry at the University of Vienna. While there he became interested in organic biochemistry and after hearing about Sir Frederick Gowland Hopkins’ work in Cambridge, he decided that was where he wanted to do his PhD thesis.  He came to Cambridge in 1936, but instead of joining Hopkins’ lab, he became a research student under world-renowned physicist J.D. Bernal at the Cavendish Laboratory.

Having completed his PhD, Max’s research was interrupted by the outbreak of World War II. Max, along with hundreds of others, was interned as an ‘enemy alien’ and sent to Canada. Following extensive efforts by other Cambridge scientists and The Royal Society, Max and fellow interned academics and teachers were released, and Max arrived back in Cambridge in January 1941. The following year, Max was engaged on a wartime project, ‘Habakkuk’, to build floating airbases made of reinforced ice. The project was eventually abandoned – as the increasing range of aircraft meant floating airbases were no longer required.

Having returned to his research, Max was joined in 1945 by John Kendrew, who had been encouraged to work with Max after meeting J. D. Bernal.  They started work together on crystals of sheep haemoglobin, before John moved onto working on myoglobin, the protein that stores oxygen in the muscles of diving mammals.

In 1947, Max and John’s funding was due to come to an end and the future of the work was in jeopardy.  David Keilin, Head of the nearby Molteno Institute, suggested to Sir Lawrence Bragg, the Cavendish Professor, that they approach Sir Edward Mellanby, the Secretary of the Medical Research Council (MRC) for funding.  This approach was successful and in October 1947, the ‘MRC Unit for Research on the Molecular Structure of Biological Systems’ was established, with Max as its Director. In 1962, the unit became the MRC Laboratory of Molecular Biology (LMB), with Max as its Chairman.

In the newly established MRC unit, Max continued to work on the structure of haemoglobin, using X-ray crystallography, and his breakthrough came in 1953 when he solved the ‘phase problem’ of the technique. This related to how the undulations of the phases of waves are in and out of step with one another. It is impossible to calculate the exact positions of the crystal planes without knowing these and therefore you do not know where the atoms are situated. Max discovered that attaching heavy metal atoms to crystals, which scatter the X-rays strongly and provide a set of reference points in the diffraction pattern, solved this problem. This method is still a cornerstone of structural biology.

Using this technique, John Kendrew went on to produce the first three-dimensional structure of a protein, myoglobin, in 1958. Shortly afterwards, Max revealed the structure of haemoglobin. In 1962, they were jointly awarded the Nobel Prize for Chemistry for their studies on the structures of proteins.

Following this, Max continued to work on protein structures. He officially retired as Chairman of the LMB in 1979, having overseen the development of the MRC unit into a first class research laboratory. He continued to work in the lab until shortly before his death. It was during this later period that Max changed the focus of his study and began to concentrate on looking at neurodegenerative diseases, especially Huntington’s disease.

Max also continued to take an interest in the work of young scientists at the LMB, often seeking them out in the canteen at lunch or tea breaks to find out what they were working on. He always insisted that young scientists were given full responsibility and credit for their work.