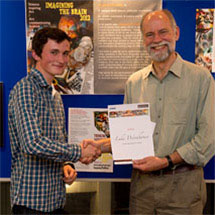 The winners of this year’s Imagining the Brain competition visited the LMB on Monday 1st October for the formal awards ceremony.

The Imagining the Brain art competition invites Cambridgeshire pupils with an interest in art and science to cut through the jargon usually associated with complex subjects like neuroscience and use art as a means of communication.

This year’s competition asked young artists to illustrate ‘different ways of thinking’ by focusing on one of two challenging topics: ‘autism spectrum conditions’ or ‘getting on your nerves’. This second topic provided a particularly demanding brief. Artists were asked to explore how structure relates to function in different types of neurons or how communication and ‘crosstalk’ help coordinate information systems – such as the nervous system and immune system – in complex organisms.

First prize was awarded to Luke Woodhouse, from Cambridge Regional College (CRC), for his work “The Complex Dynamic of Thought” illustrating how neural activity leads to thought and then action. Besides winning a cash prize of £100, donated by project sponsor KPMG, Luke was also awarded the position of artist in residence at the Neurobiology Division of the LMB. There he will use his talents to communicate science at the forefront of research.
Chelsey Bishop of The Leys School in Cambridge won second prize with her beautiful and sensitive artwork of a young boy with autism and Charlotte Donald of Netherhall Sixth Form College was awarded third prize for her work on the same subject. Highly commended awards went to Emma Horsfall of CRC and Eildh Maccullum of Netherhall Sixth Form College.

The 2012 KPMG Schools Award for Science Communication was awarded to the art department of Cambridge Regional College. Yvonne Vallis, who organized the event, said: “This is the second year that CRC art students have participated in Imagining the Brain and their commitment, professionalism and talent has shone through. We look forward to working closely with CRC students again in the future.”

The judges were thrilled with the overall quality of the work. Karen Thomas, Arts Development Manager for Swavesey and the surrounding area, said: “I found the standard of work produced truly astounding. The young artists engaged well with the subjects and approached them sensitively and creatively. The work produced encapsulated a broad range of media and a variety of approaches to challenging subject matters.

“Imagining the Brain is an inspiring project. It welcomes young artists and offers them the opportunity to creatively engage and interpret the challenging concepts and research areas that the LMB spearheads. It is a ‘real-world’ insight into how artists work as they must respond to a brief, research a topic thoroughly and apply their own artistic practice to create an outcome which engages strongly.”

Rosie O’Donovan, Assistant Education Officer at Kettle’s Yard, also on the judging panel, shared these views: “The quality of work that the students produced was fantastic and I was really impressed by how thoughtfully and creatively they had engaged with the given subjects. I very much appreciate the LMB’s commitment to the project and the project team’s obvious joy in working with young people to bring art and science together.”

The awards evening also saw the announcement of the new topics for the 2013 competition. In 2013 the concept of “Changing Brains” will be explored in two themes. The first, neurotechnology, looks at the interaction of medical electronics with the nervous system, from cochlear implants to neural implants that enable computer operation through thought alone. The second theme, the teenage brain, explores how the human brain develops during adolescence, allowing us to understand everything from why teenagers have trouble getting up in the morning to risk-taking behavior and how some of these behaviours can be positive adaptations.

Information packs will be sent to schools in October.

Imagining the Brain
2012 entries and winners