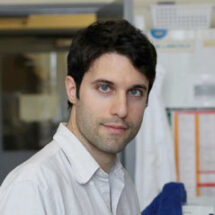 Alessio Vagnoni, a post-doc in Simon Bullock’s group in the LMB’s Cell Biology Division has been awarded the NC3Rs David Sainsbury Fellowship 2015-2018. The David Sainsbury Fellowship was introduced in 2012 to support talented early career scientists engaged in 3Rs (replacement, reduction and refinement) research and Alessio is the tenth Fellow to be appointed. Alessio starts his Fellowship in July 2016 and will divide his time between the LMB and University College London to study axonal transport and neuronal ageing in Drosophila melanogaster (the fruit fly) and murine neurons, which is particularly relevant to age-related diseases such as dementia. The fly’s short life span makes it a more practical and cost effective model for studying the long-term effects of ageing than traditional mouse models.

Invertebrates such as Drosophila are used extensively in research on complex biological processes and disease mechanisms. They have the potential to replace the use of mammalian models in some studies, but maximising this opportunity is challenging and dependent on building confidence in non-mammalian models as realistic alternatives. Alessio will further develop and validate Drosophila as an alternative to mammalian models in ageing research, taking advantage of the fly’s short lifespan and transparent wings, which make it easy to observe intact neurons as they age, allowing him to gather information in real time. By combining in vivo imaging studies in whole organisms with the use of stem cell-derived neuronal cultures, his aim is to study the regulators of axonal transport and mitochondrial trafficking within neuronal axons and how this process is regulated over the lifetime of an organism. This process is crucial for the function of neurons and becomes less efficient as the cells age. The knowledge gained from studying the mechanisms that underlie neuronal ageing will have significant implications for our understanding of age-dependent neurological disorders.

The Fellowship is awarded by the National Centre for the Replacement, Refinement and Reduction of Animals in Research (NC3Rs), a leading independent scientific organisation dedicated to replacing, refining and reducing the use of animals in research and testing (the 3Rs).