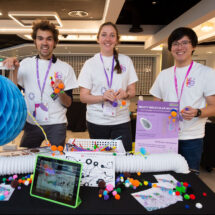 Over 30 LMB researchers have taken part in a range of activities as part of LifeLab 2018 and Big Biology Day, bringing their research to public spaces in Peterborough and Cambridge in the form of hands-on activities and discussions.

LifeLab is a European Commission-funded programme of events taking place as part of European Researchers’ Night and was one of 55 similar projects happening around Europe. As well as the LMB, there were researchers and scientists from 4 other Cambridgeshire-based research institutions.

The Queensgate Centre in Peterborough, and the Grafton Centre and Grand Arcade in Cambridge, were turned into pop-up labs for the event, with LMB scientists inviting members of the public to learn about their research and take part in their activities. Shoppers could visit the “Mighty Molecular Motors” stand to learn about the tiny machines that organise the inside of our cells by making pompom and pipe cleaner models of the molecular motor, dynein, they could look at “mini-brains” in a dish and find out how these brain organoids are used to study brain development, and they got the opportunity to look at some of their own cheek cells under a microscope.

LMB scientists were also involved in a panel debate about the future of genomic medicine, a LifeLab special edition of Café Sci Cambridge in which researchers shared their favourite gene with the audience to try to convince them that their gene was the best, and the ‘Quids In!’ family-friendly session at the Cambridge Science Centre. School visits also took place as part of LifeLab and one LMB PhD student talked to students at Neale-Wade Academy in March about research on circadian rhythms. Other events included science-themed pizzas, special film screenings and displays at The Light Cinema, a tour of some of Cambridge’s best kept scientific secrets, and scientists performing comedy.

After the event, one LMB researcher commented on her experience:

“It was a heart-warming and extremely humbling experience to connect with the public and share just the tiniest bit of science knowledge and visibly make such a huge impact and lasting positive impression on them.

LifeLab has taught me that science is not restricted to the lab or medical and technology breakthroughs, but it can be in fact used for breakthroughs in communication and build better relations with people from all walks of life.”

Big Biology Day is an annual event taking place at Hills Road Sixth Form College and this year was the biggest yet, with an estimated 2100 visitors and volunteers representing over 40 different departments, institutes, organisations, or companies. LMB researchers gave people the opportunity to design and create their own model protein using concepts from synthetic biology, while also learning about how synthetic biology is changing our lives with new biofuels, medicines, and products to make housework easier. One visitor commented afterwards:

“Can I just say thank you for welcoming my 2-year old daughter at the Big Biology event. She hasn’t stopped talking about it. You guys were great with her. She loves anything science or nature related. She woke up this morning asking for her free book. A credit to you all.”