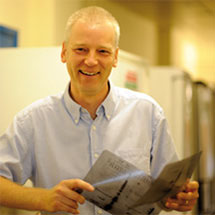 Andrew McKenzie from the LMB’s PNAC Division has been elected as a Fellow of the Academy of Medical Sciences.

The Academy promotes the translation of advances in medical science into benefits for patients and the population at large: fellowship of the Academy is given for outstanding contributions to the advancement of medical sciences.

Andrew’s research investigates how the cells in the immune system communicate by sending out protein messengers, interleukins, that are received by other cells and cause them to switch on specific functions. Andrew’s focus is on the immune response caused by allergic asthma which is triggered by an abnormal reaction to a variety of allergens. His group have shown that by blocking the action of one of these proteins, called Interleukin-25 (IL-25), they can prevent airway inflammation and over-responsiveness of the airways to an allergen. This work has also led to the identification of a new immune cell, called the nuocyte, that plays a key role in these responses.

They are now investigating exactly how IL-25 is involved in asthma, why blocking it has such a profound effect, and validating its therapeutic potential for treating asthma.

Andrew joined the LMB in 1994 and has been a group leader since 2002. He completed his PhD in cell biology and immunology at University College, London.