The LMB Workshops have a long history of training staff and offering apprenticeships to give the next generation of technicians the skills and experience they need in a working environment. Over the past 3 years the LMB has, as part of a Government initiative to provide three million new apprenticeships by 2020, supported two MRC apprentices in the Mechanical and Electronics Workshops. Steve Scotcher, Head of the Mechanical Workshop is keen to promote apprenticeships as an alternative to university, having been an apprentice himself. 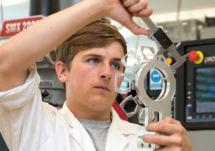 Josh Firman, who joined the Mechanical Workshop at the age of 19, has just completed his 3 year apprenticeship. Josh came to the LMB after working on his dad’s fruit and veg market stall. His keen interest in motorsports led him onto engineering, having seen high-end machinery producing high-end components. Although he had no mechanical background or training he impressed the team at his interview. Josh had an experienced full-time member of staff as his mentor and trainer, who had himself been through the same training process when he joined the LMB back in 1993. The training started with some very basic tasks and gradually moved forward until Josh could work independently. He showed a natural talent for the job and has turned out some very nice examples of design and manufacture. Josh can now use all the machine tools both manual and CNC (computer numerical control), he can draw and design using CAD/CAM solidworks software, write machine code for the CNC mills and lathes, work in any material given to him (metals, polymers etc.), and do 101 other things. Josh commented: “From day one of my apprenticeship I received excellent one-on-one training. I was assigned a mentor from the get-go, meaning I had a clear line of communication with regards to what needed to be carried out. Having successfully completed the apprenticeship I am glad I took on the opportunity. With the apprenticeship you get out what you put in; having worked hard over the 3 years I have gained good grades and skills allowing me to step into a full time post and continue to further myself as an engineer.“ Although Josh has completed all the academic parts of the official apprenticeship, the LMB encourages all staff to continue as far as they can. Josh will start day release at University Campus Suffolk (UCS) Bury St Edmunds shortly to hopefully gain an HNC. After this he can continue to HND level and thereafter maybe a degree. 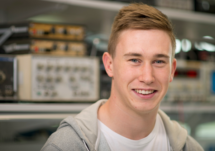 Matthew Bauld, who joined the Electronics Workshop at the age of 18, has completed his 3 year apprenticeship in electrical/electronic engineering, achieving the remarkable result of a double distinction from Cambridge Regional College. Matthew came to the LMB after completing his A’ levels at Long Road Sixth Form College where he had studied architecture and sports studies. He had no previous experience of engineering at the time but showed a real enthusiasm and desire to learn. During the first year at college the curriculum covered a wide range of engineering skills and practices and this was combined with a series of projects undertaken within the workplace that introduced and developed the theoretical knowledge into the practical expertise needed in the real world. In the final two years his college work became more focussed on electronics design principles and his work within the laboratory has also progressed to the point that he is designing and constructing complex electronic instrumentation in partnership with scientific staff within the lab. Having now completed his apprenticeship Matthew will take up a permanent post at the LMB while continuing his studies at HNC/HND (and hopefully higher) level on a day release basis. Howard Andrews, Head of Electronics commented: “Our experience of the apprenticeship scheme has been entirely positive enabling us to gain a member of the department who has the necessary skills, knowledge and experience to deal with the instrumentation needs of a top class scientific institute.” For his part Matt commented: “I am glad I took on this apprenticeship and I feel it has allowed me to develop my engineering skills immensely. When I first started my apprenticeship here at the LMB I didn’t know the first thing about electronics, but the apprenticeship scheme has allowed me to gain both practical and theoretical knowledge and I am now at the stage where I am able to develop and produce electronic equipment, from scratch, that the scientists around the lab are able to use to carry out research.”

In the past, apprenticeships have varied greatly in quality, and were generally set up by schools and colleges. This meant that apprentices did not always leave with the skills that employers seek. Apprenticeships have also been seen by some as a poor substitute for a university education. However, many young people are now saddled with large loan repayments on completion of their university courses, whereas an apprentice will have gained valuable ‘on the job training’ and earned a ‘living’ wage while doing so.