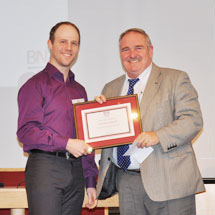 Christian Münch, a postgraduate student working in Anne Bertolotti’s group in the LMB’s Division of Neurobiology has been awarded the 2011 British Neuroscience Association (BNA) Postgraduate Award. This is awarded annually to one student considered to have made a significant contribution to neuroscience and to have achieved an outstanding performance in their viva voce.

The focus of Christian’s PhD studies has been the protein superoxide dismutase-1 (SOD1). Mutated forms of SOD1 cause a subset of inherited cases of amyotrophic lateral sclerosis (ALS). ALS is a neurodegenerative disease in which motor neurons are prominently affected and for which there is no cure. Mutant SOD1 forms aggregates, which leads to nerve cell loss, resulting in the symptoms of ALS. During his PhD work, Christian studied what causes aggregation of mutant SOD1 in the test tube and in cells. He found that disease-causing SOD1 mutations confer a common property to the mutated protein, which is the propensity to expose sticky surfaces resulting in its aggregation.

These findings allow a better understanding of how the disease starts and spreads and offer potential targets for novel therapeutic approaches.
Christian received his prize at the BNA Christmas Symposium, at the Royal Society in London, on 14th December 2011.