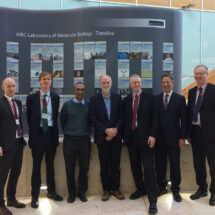 Members of the Committee on Exiting the EU visited the LMB to hold a roundtable discussion with local representatives from science, research, health, pharmaceuticals and technology sectors, after a public session held at the Cancer Research UK Cambridge Institute. The roundtable was followed by a tour of the LMB for the Committee members, led by Hugh Pelham and Venki Ramakrishnan.

The Committee on Exiting the EU came to the Cambridge Biomedical Campus as part of its programme of visiting all the nations and regions of the UK to hear views on the implications of the UK leaving the EU.

The Committee, chaired by Hilary Benn MP, has a remit to scrutinise the work of the Department for Exiting the EU. The purpose of the visit to Cambridge was to hear views on what the Government needs to prioritise in the ongoing negotiations with the EU, to ensure that the UK can continue to collaborate with European and other international partners, and remain one of the best places in the world for research, science and innovation.

During the tour of the LMB, members of the Committee including Hilary Benn MP, Stephen Timms MP, Jeremy Lefroy MP, Stephen Kinnock MP and Jonathan Djanogly MP learned about the LMB’s successes in areas from structural biology to development of monoclonal antibodies and discovery of the structure of DNA, and the roles played by key LMB alumni including Francis Crick, Jim Watson, César Milstein, Sydney Brenner and Max Perutz. 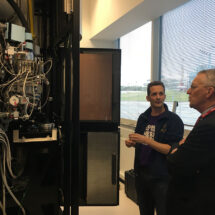 The Committee met Richard Henderson and Sjors Scheres, who explained how the development of cryo-electron microscopy at the LMB has enabled the atomic resolution of key biological molecules to be determined, such as those implicated in the development of Alzheimer’s Disease, and how this increased understanding is already impacting therapeutic drug design in pharmaceutical companies.

Michel Goedert further explained how his group’s research into protein aggregation in brain neurons has helped reveal the underlying cause of Alzheimer’s disease, and how further understanding the disease process could underpin development of preventative medicines.