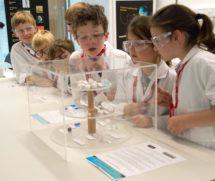 The annual Eastern Region Crystal Growing Competition for Schools has been hosted at the LMB since 1998. The competition, designed to inspire children with a love of science, invites school pupils to grow crystals of potash alum over a five-week period. The pupils then send their best crystals to the LMB for judging.

This year, forty schools from all over the east of England entered the competition. Laxton Junior School, in Oundle, took first place in the Key Stage II age group, with Harrold Priory Middle School, Bedfordshire, in second place. In the Key Stage III competition, Stanborough School, in Welwyn Garden City, came first and Fearnhill School, Letchworth, took second place.  The winning crystals were displayed at the Crystal Clear exhibit, at the University of Cambridge Department of Chemistry Open Day, during the Cambridge Science Festival in March 2015. 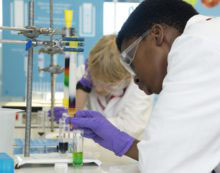 Children from the winning schools visited the LMB in June and July 2015. Following an introduction to the laboratory, explaining how and why scientists are studying the molecules of life, the pupils got some hands-on science experience: looking at protein crystals under microscopes, interacting with 3D computer graphics of protein molecules, extracting DNA from fruit and experimenting with chromatography, using filter paper and gel filtration to separate food dyes.

The children, aged between 8 and 14, were very excited about their visit and some of their comments included:

“We had a great day and it was an amazing opportunity.”

“The best bit was when we extracted DNA from a slice of banana! It was a brilliant day and it will stay in my mind forever.”

“…The other thing I liked about the lab was the 3D vision glasses that you could see the proteins on a computer. I really liked that.”

“… I also liked to wear the lab coats, glasses and gloves because you then actually felt like a scientist.“

The competition was sponsored by the LMB and the Cambridge Crystallographic Data Centre.