Each year, pupils from all over the East of England compete to grow the best crystal of potash alum possible, in the Eastern Region Crystal Growing Competition. This year, during the International Year of Crystallography, the competition was hugely popular, with nearly 80 schools participating in two age groups.

The top prize in Key Stage II went to Laxton Junior School near Peterborough, with Robert Arkenstall Primary School, Haddenham in second place. For Key Stage III, first prize was awarded to The Stephen Perse Foundation in Cambridge, with Stanway School in Colchester coming a close second. All the crystals were displayed at the Cambridge Science Festival in March, and pupils from the winning schools were recently invited to the laboratory for some hands-on science . 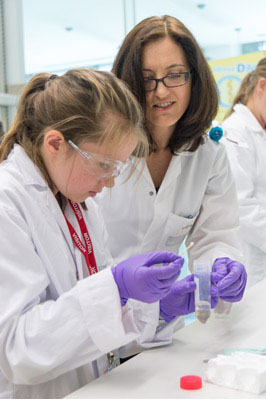 The competition aims to inspire a new generation of scientists. Over 50 pupils came to the LMB to experience some science in action. The students separated food dyes with filter paper and gel filtration chromatography, and extracted DNA from fruit. They also learned about proteins, looked at protein crystals under microscopes and experimented with 3D computer graphics of proteins. The children were really excited about their visit, as shown by some of their comments which included:

“I loved wearing the lab coat, glasses and gloves. I’m going to go to university when I’m older. That was great!”

“During the trip yesterday I really enjoyed finding DNA from the banana and when we were talking about DNA and its history.”

“It has inspired me to learn more about Science and revise harder for my next Science exam.”

Sue Pearson, from Laxton Junior school, thanked the LMB team for explaining the complex concepts to the children. She said “the children came away fired up and raring to do more science. It made all of the talking and simple experiments we do in school much more meaningful when they could see that real scientists follow the same principles.”

The competition is sponsored by the LMB and the Cambridge Crystallographic Data Centre. Anyone who would like to enter next year’s competition should look out for details on our website in September.