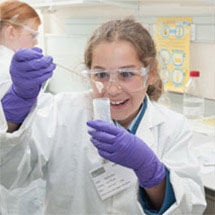 Pupils from The Perse School for Girls in Cambridge and Laxton Junior School in Peterborough scooped the top prizes in this year’s Eastern Region Crystal Growing Competition.

Competition participants were asked to grow the best crystal of potash alum possible, over a five-week period. The crystals were then judged, on both size and quality, to identify the winners (in the Key Stage II and III competition categories).

The competition, which is sponsored by the LMB and the Cambridge Crystallographic Data Centre, is aimed at encouraging a whole new generation of scientists. As Sam Wynne, the competition organiser, comments: “This year’s winners included Linslade School in Leighton Buzzard in second place and Hertswood School in Hertfordshire in third place.”

Sam continues: “It was great to be able to welcome groups of pupils from three of the winning schools to special workshops at the LMB. There was a real sense of enthusiasm from the students in seeing scientists in action, in experiencing a working laboratory and in getting hands-on experience of science.”
The school workshops started with an introduction to the laboratory, explaining how and why scientists are studying the molecules of life. The students were then split into small groups and took part in a range of hands-on activities. In the first of these they found out about DNA and extracted DNA from bananas and strawberries. The students then tried chromatography, separating food dyes with filter paper and gel filtration. They also learned about proteins, looked at protein crystals under microscopes and experimented with 3D graphics of proteins on computers. 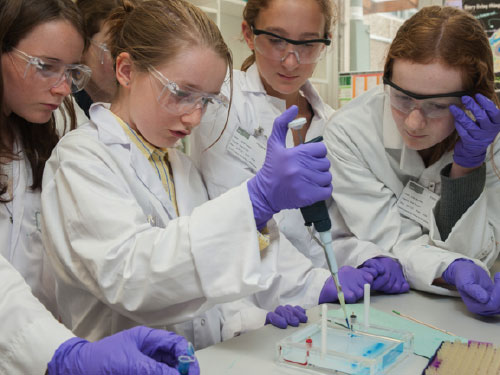 Rebecca Evans, from Linslade School, echoed the thoughts of many of the pupils taking part by saying: “The main comment was that we didn’t have enough time with you!”

Sue Pearson, a teacher from Laxton Junior School, said: “… the children were very impressed and really felt that they were somewhere special and important (which of course they were!). It was all pitched at exactly the right level for them, and for them to see ‘real scientists’ in action is such a privilege.”

Applications are now being accepted for the 2013 competition.