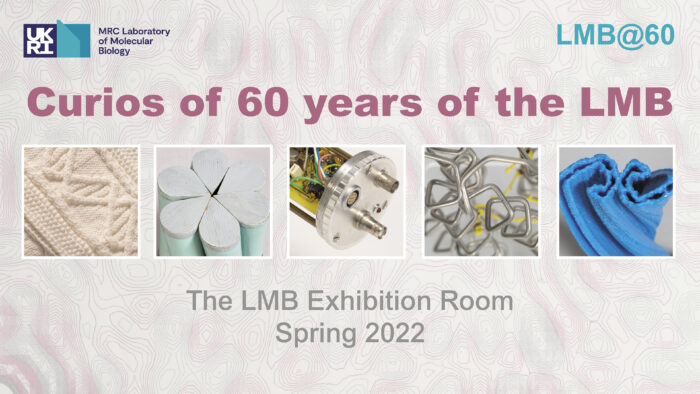 In the first of two exhibitions celebrating 60 years of the LMB, an assortment of curios – unusual and intriguing items – have been gathered together to give a glimpse into the life and work of the LMB. From scientific models, to restaurant menus, Nobel prize telegrams and a special lab coat, find out more about the LMB from some of the objects made and collected through the decades.

Also on view is a rare amateur film of the first couple of years of the LMB, including one of the Lab’s first Nobel celebrations. Taken by former LMB student, Hans Boye, it shows footage inside the original 1962 building, and some of the scientists working there at the time, including: Max Perutz; John Kendrew; Sydney Brenner; Francis Crick and Aaron Klug.

Several of the items have been loaned to the exhibition by LMB scientists. One of the most interesting selections are two models of tau protein filament – the component responsible for many neurodegenerative diseases. The models, made over 30 years apart, are remarkably similar in overall shape, but with the earlier one representing a 20 Ångstrom (low-resolution) structure and the later 2 Ångstrom (high-resolution), the detail is significantly different. As is the choice of material used to make the models – balsa wood was a key choice for earlier model making, whereas today we can use 3D printing.

In other selections, there is a glimpse of life away from the lab bench, from Royal openings, annual Christmas skits, awards and a staff restaurant menu. Just how much did the ‘famous’ LMB scones cost in 1971?

A second exhibition, featuring 60 years of photographic memories, will take place in the summer, and include some rarely seen images taken by past and present members of the LMB.

The LMB exhibition room is situated next to reception and accessible to all during working hours.