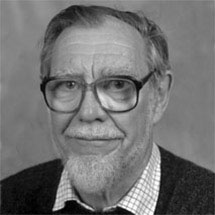 It is with great sadness that we report that Dan Brown, who had been battling cancer for some time, died on Tuesday April 24, 2012, aged 89.

Dan was an outstanding nucleotide chemist who in 1951, with the future Nobel Laureate Alexander Todd, determined definitively the chemical linkage in DNA and RNA and who was one of the pioneers in the chemistry of nucleic acids. He was made a Fellow of the Royal Society in 1982.

Dan began his LMB work in 1981 on sabbatical from the Chemistry Department of the University of Cambridge, working with Jon Karn and Philip Goelet. After a brief return to Lensfield Road, he decided to take early retirement from the University and was invited by Sydney Brenner to join the LMB as an Attached Scientist, initially to help the sequencing of unc-54 myosin heavy chain gene from C. elegans. His main contributions, however, were a series of papers together with Paul Kong, David Williams and David Loakes on hydrogen bond degenerate and universal bases that could be used in DNA sequencing and in PCR for mutagenesis and protein evolution. In addition he worked with David Loakes and Kathleen Too on antiviral nucleosides, with the concept of generating viral error catastrophe in polymerases and reverse transcriptases.

He retired formally from the LMB in 2002 but continued publishing until 2008. He was a frequent visitor, attended many seminars including the LMB Symposium, and continued to take a keen interest in chemistry until very shortly before his death. He was a good friend to many in the LMB.

A memorial for Dan will be held at King’s College, Cambridge, later in the year.