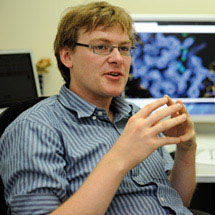 Dr David Komander from LMB’s PNAC Division has received a prestigious European award. He has been elected into the EMBO Young Investigator Programme for three-years, starting on 1 January 2011.

The programme identifies some of the brightest young researchers in Europe, providing academic, practical and financial support. David will join a vibrant network of 200 Young Investigators from all over Europe.

David’s research looks at specificity in the ubiquitin system. Every cellular protein is regulated by modifications that take place in response to many kinds of signals and allow cells to adapt appropriately to ever changing environments. Ubiquitination is one such modification. A large number of human diseases, from cancer to infection and inflammation, emerge when the ubiquitin system is disturbed.

David has been invited to participate in the 11th EMBO Young Investigator Meeting to be held at EMBL, Heidelberg, Germany from 16-18 May 2011.