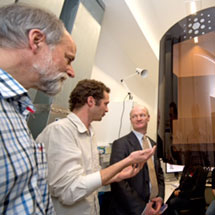 The Rt Hon David Willetts, MP, Minister for Universities and Science, made a return visit to the new LMB building, accompanied by the Rt Hon Andrew Lansley, CBE, MP for South Cambridgeshire and Leader of the House of Commons, and Vicky Ford, MEP for the East of England on Friday 7th March.

The Minister who first visited during the topping-out ceremony for the new building in September 2010, was shown around by Hugh Pelham, LMB Director, and Martin Dougherty, LMB Chief Operating Officer.

The tour included a walk through the Structural Studies laboratory research areas and a visit to the new Electron Microscopy (EM) suite.  Here they viewed the microscopes and learnt about the latest developments in the technique of 3D-EM from Sjors Scheres, LMB Group Leader.  They also had a general tour of the Lab, and were joined in the restaurant by Venki Ramakrishnan, Deputy Director of LMB, for further discussions.

Following the visit Hugh said “David Willetts was keen to learn about how the new building is working, and also about other developments on the Cambridge Biomedical Campus.  We were very happy to show our visitors the latest advances that the new building has made possible.” 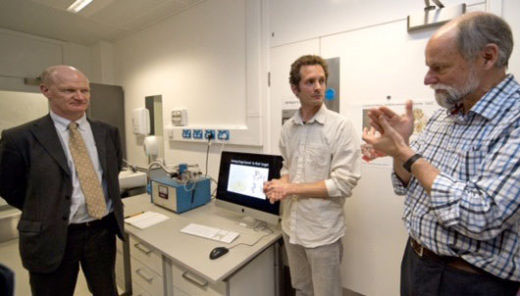