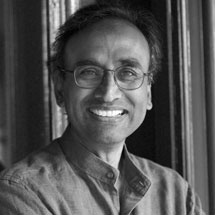 This year’s chemistry Nobel Prize has been awarded to Dr Venki Ramakrishnan of LMB for “studies of the structure and function of the ribosome”.
Venki Ramakrishnan shares the honour with Thomas A. Steitz (Yale University) and Ada E. Yonath (Weizmann Institute of Science, Israel). The trio showed how the information encoded on strands of DNA is translated into the proteins of life.

Working independently, they demonstrated what the ribosome looks like and how it functions at an atomic level using a visualisation method called X-ray crystallography. This technique allowed them to map the position of hundreds of thousands of atoms that make up the ribosome.

The research, scientists said, has had important medical implications. Many of today’s antibiotics act by stopping bacterial ribosomes from working, so further insight into the way ribosomes function could help develop new medicines.

Dr Ramakrishnan also highlighted that the breakthrough proved how important it is to fund research which doesn’t have immediate clinical applications. “The idea of supporting long-term basic research like that at LMB does lead to breakthroughs. The ribosome is already starting to show its medical importance”, he said.
The Nobel Laureate was born and educated in India, obtained his Ph.D at Ohio University and worked for 25 years in the States before joining LMB in 1999.

Dr Hugh Pelham, LMB Director, congratulated Venki on his spectacular achievements. “LMB aims to be a place where very challenging long-term projects can be supported, and I am delighted that Venki has shown just how successful this approach can be”.

Venki Ramakrishnan delivered his Nobel Lecture on 8 December at Aula Magna (Stockholm University) and received his Nobel Prize Medal from the hands of King Carl XVI Gustaf of Sweden at the awards ceremony which took place on 10 December at the Stockholm Concert Hall in Sweden.