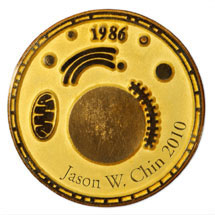 On the 10th May, the European Molecular Biology Organization (EMBO) announced the award of the EMBO Gold Medal 2010 to Jason W. Chin from LMB.

Each year, EMBO awards the Gold Medal – widely regarded as one of the most prestigious life sciences awards in Europe – to recognize the outstanding contributions of young researchers in the molecular life sciences.

Jason receives the award for his pioneering work on reprogramming the genetic code. Jason’s work allows designer amino acids to be encoded at specific, predetermined positions in proteins in vivo, enabling molecular biologists to control and elucidate the functions of proteins in cells with unprecedented precision.

Upon hearing that he had been awarded the medal for 2010 Jason said: “Given all the great science happening in Europe right now I am delighted to receive this award. I am very grateful to all my colleagues who have made the science possible.”
Jason’s work “identifies him as an outstanding molecular biologist of his generation,” commented Paul Nurse, President of Rockefeller University. “Jason is one of the most brilliant, original and imaginative scientists I know,” added Nobel Laureate Venki Ramakrishnan, who is also at LMB.

Jason began his quest to rewrite the genetic code during his postdoctoral research years at The Scripps Research Institute in California. There he pioneered the development of an orthogonal aminoacyl-tRNA synthetase / tRNACUA pair to direct the incorporation of designer amino acids into proteins in response to the amber stop codon. Since establishing his independent group at LMB Jason has developed general methods for creating new orthogonal aminoacyl-tRNAsynthetase / tRNA pairs and created new orthogonal ribosomes that decode quadruplet rather than triplet codons. By bringing together the new ribosomes and aminoacyl-tRNA synthetases in the same cell he has created a new translation system that operates in parallel with natural protein translation and allows the incorporation of multiple designer amino acids into proteins in cells. “The translation system really represents the ultimate paradigm for assembling polymers of defined sequence,” Jason explains. “We would like to be able to synthesize and evolve designer polymers in cells.”

The new polymers Jason envisions might offer key benefits for the creation of stable protein-like therapeutics and enable the discovery and synthesis of biological plastics and other materials. “Our work builds on decades of research that have provided a fundamental structural and mechanistic understanding of how protein translation functions. Using this knowledge to create new systems that help us further understand biology at the molecular level and provide enabling technologies for encoded polymer synthesis is really exciting. We are just at the beginning of investigating what might be possible,” Jason notes.

In 2005, Jason was selected to benefit from the highly competitive EMBO Young Investigator Programme. The Royal Society honoured him with the Francis Crick Prize Lecture in 2009. In addition to core funding from the MRC, his research benefits from an ERC Starting Grant (2008-2013) and an HFSP program grant (2009-2012).

Jason will receive the EMBO Gold Medal and an award of 10,000 euro on the 6th September 2010 at The EMBO Meeting in Barcelona where he will give a special lecture about his research.