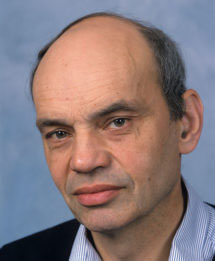 Graeme Mitchison, a scientist with exceptionally wide-ranging interests and a very sharp and logical mind, died on 13 April.  He had a long association with the LMB, going back to the late 1960s, and worked as that rare individual, a true theoretical biologist, in a number of scientific areas.

Graeme joined the LMB’s Cell Biology Division in 1969, following his PhD in pure mathematics.  He was interviewed by Sydney Brenner and Francis Crick, and remembers that Francis asked him if he was any good with his hands, to which he responded that he played the piano, which apparently was an adequate demonstration of dexterity.  He was initially involved in investigating pattern formation with Michael Wilcox, who was studying the filamentous blue-green alga Anabaena.  Anabaena consists of a linear array of dividing cells, with occasional non-dividing heterocysts in between, which fix nitrogen for use by their neighbours.  Graeme and Michael showed that heterocysts arise when a sufficiently large gap occurs between the dividing cells.  In fact, all cells have a tendency to become heterocysts but most are prevented from doing so by a long-range inhibitor produced by the heterocysts themselves.  Following this, Graeme became interested in the formation of vein patterns in plants, and published a series of papers on how auxin signaling and transport can explain the observed patterns.  Around the same time he published a single author paper in Science on “Phyllotaxis and the Fibonacci series”, which explains why when you count the spirals in pine cones and sunflowers and many other plants you observe Fibonacci numbers.

In 1980, Graeme went to the Salk Institute for Biological Studies, La Jolla, USA, to visit Francis Crick, which resulted in papers on the organization of the brain, most notably ‘The function of dream sleep’, Nature 304: 111-114 (1983).  They proposed that this was a method of suppressing incorrect associations formed by neural network learning mechanisms in the cerebral cortex, with the consequence that the last thing that you should do with respect to your dreams is to remember them.  On his return to Cambridge in 1982, Graeme was seconded to Horace Barlow’s group in the Physiological Laboratory (now the Department of Physiology, Development and Neuroscience) of the University of Cambridge, and worked on stereoscopic matching and on neuronal branching patterns.

Graeme returned to the LMB in 1995, becoming a Programme Leader in the Structural Studies Division.  His work in this period covered two quite distinct areas: bioinformatics and optics.  He worked with Richard Durbin in applying pattern recognition techniques to biological sequences and with Sarah Teichmann on evolutionary signals in bacterial proteins and transcription factors.  In optics, he explored some ideas in biomedical light microscopy with the aim of helping to minimise damage to specimens due to intense light sources.  During this time, he also became interested in quantum information and computing, giving a memorable lab talk on “counterfactual computation” one year.  In 2005 he left the LMB and joined Cambridge University’s Department of Applied Mathematics and Theoretical Physics to pursue these interests.  Subsequently he also became affiliated to the Sainsbury Laboratory in Cambridge University Botanical Garden, where he returned to his work on pattern formation in plant growth in the light of modern molecular genetic knowledge, and continued working in this area until his death.

Graeme continued to keep in touch with colleagues and friends at LMB, including celebrating the opening of the new LMB building at the LMB Alumni Symposium in 2014.  He will be sorely missed.