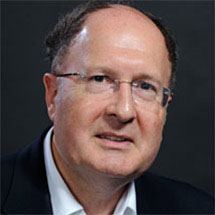 Greg Winter, former Deputy Director of the LMB, has been jointly awarded the Spanish “Prince of Asturias Award for Technical and Scientific Research 2012.” Greg shares the prize with Dr Richard Lerner of the Scripps Research Institute for their contributions to the field of immunology and, in particular, their work on therapeutic antibodies.

In the 1970s César Milstein and Georges Köhler of the LMB discovered how to make rodent monoclonal antibodies. This allowed the creation of antibodies able to attack human cells or proteins involved in disease processes. Unfortunately these antibodies were not suitable for clinical use, as they were seen as foreign in humans, provoking a blocking human immune response.

In the mid 1980s, using protein engineering, Greg discovered that the rodent monoclonal antibodies could be humanised by transplanting the antigen-binding loops into human antibodies. The MRC patented and licensed this technology, and was directly involved in the development of antibody medicines with industry. Many important antibodies of this class were developed, including those against breast cancer (Herceptin) and colorectal cancer (Avastin).

In the late 1980s Greg invented another approach to making antibodies. This involved creating large libraries of antibody genes, expressing the antibody fragments in bacteria and identifying those with binding activities to the desired target. This allowed human antibodies to be created directly. At the same time Dr Lerner was developing a similar approach in the Scripps.
To translate this work to the clinic, the MRC, Greg and other LMB scientists including César Milstein, co-founded the biotechnology company Cambridge Antibody Technology. This allowed the technology to be developed further and for collaborative work with industry, and led ultimately to the first human antibody, Humira, to be approved by the US FDA for therapy. Humira, used to treat rheumatoid arthritis, is set to become the world’s leading pharmaceutical product.

Millions of patients have benefited from antibody therapeutics, and the MRC has received in excess of USD $750M in royalties, which have been fed back into medical research.