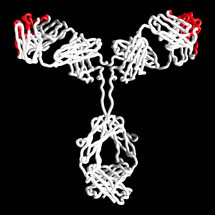 Sir Gregory Winter, from the LMB’s PNAC Division and a former Deputy Director of the LMB, has been awarded a 2013 Canada Gairdner International Award – one of the world’s most important medical research prizes.

Greg won the Award: “For the engineering of humanized monoclonal antibodies and their widespread use in medical therapy, particularly for treatment of cancer and immune disorders”. The Awards also recognize scientists whose work holds important potential. In Greg’s case the Gairdner Foundation identified that: “The possibilities for future application are endless. Researchers continue to use Sir Gregory Winter’s methods to develop new treatments against a variety of human diseases.”

Through his research, Greg discovered how to genetically engineer synthetic human antibodies against human targets (such as cancer and inflammatory disease) in a way where they wouldn’t be rejected by the immune system. This discovery led to the development of important pharmaceutical agents such as the human antibodies Herceptin® and Humira®, which are used extensively worldwide. Monoclonal antibodies now account for a third of all new treatments including therapeutic products for breast cancer, leukaemia, asthma, arthritis, psoriasis and transplant rejection.

Commenting on the Award Greg said: “At the LMB I worked with Cesar Milstein who won an International Gairdner Award in 1981 for his work with antibodies. It is a great honour to receive the same award for my own research in helping to combat cancer and other non-infectious diseases.”

The Canada Gairdner International Awards
Therapeutic antibodies and the LMB