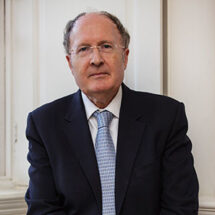 Greg Winter, an Emeritus Group Leader in the LMB’s PNAC Division and formerly Deputy Director of the LMB, has been awarded the 2016 Prince Mahidol Award for, “outstanding performance and research in the field of medicine for the benefit of mankind”.

Greg won the award for his development of humanised therapeutic antibodies. Through his research, Greg discovered how to genetically engineer synthetic human monoclonal antibodies against human targets such that they were compatible with the human immune system. This discovery led to the development of important pharmaceutical agents such as the human antibodies Herceptin® and later Humira®, which are used extensively worldwide. Monoclonal antibodies now account for a third of all new treatments and provide therapy for a diverse array of diseases from breast cancer to arthritis.

Commenting on the award, Greg said: “I came up with the idea of humanising antibodies as a young group leader, a few months after being given tenure. The LMB, and in particular Cesar Milstein, encouraged us to tackle difficult and important problems, and not to worry too much about publications, and I think myself very lucky it all worked out so well!”