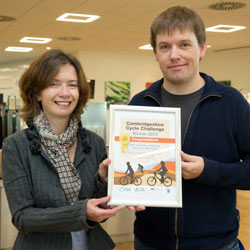 For the third consecutive time, the LMB and MRC Centre Cambridge have won the local workplace cycle challenge, in the large company category for organisations with 500+ staff.

This excellent effort was rewarded with the presentation of a certificate and the prize of a Chocolate Brownie Mountain, from Chocolicious, at the LMB on 12th June. Mathias Pasche, from the LMB, who co-ordinated the LMB and MRC Centre’s participation commented “The effort paid off, not only resulting in better fitness but also in burning off some calories. To regain this calorie loss this year’s prize is more than welcome.”