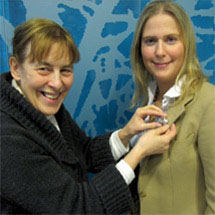 A jewellery heirloom has been passed to Sarah Teichmann on International Women’s Day to mark her major contribution to science. Sarah, from the LMB’s Structural Studies Division, was nominated by last year’s awardee, Janet Thornton from the European Bioinformatics Institute. Sarah is one of a number of leading life scientists and communicators to be recognised in this way through an initiative pioneered by the MRC Clinical Sciences Centre.

The award of this heirloom, a hand-crafted brooch designed by Central Saint Martin’s College of Art and Design, recognises Sarah’s achievements in structural bioinformatics. The brooch is part of a bespoke jewellery and textiles collection designed and created to commemorate a century of women in life science. The designs reference the suffrage movement that fought for equal voting rights at the start of the last century.

This award is unusual in that it was established for the first time last year and pieces of jewellery were given to 11 established senior women scientists in the UK. As part of the scheme it was planned that each piece is passed down from one scientist to another. Last year’s awardees have now each identified a woman scientist who is an up and coming scientific star, both as a means of encouragement and also as a recognition of their current standing. Alongside the awards, a debate about why there are so few female Nobel Prize winning scientists and how female scientists can be encouraged to become leaders took place.

Sarah’s research spans genomics, computational and systems biology. Her group’s discoveries include important general principles in classification, evolution and assembly of multi-domain proteins and protein complexes that will improve engineering and manipulation of protein complexes, and aid quaternary structure predictions. They have shown how transcriptional regulatory networks in prokaryotes and eukaryotes evolve by gene duplication, and how network topology is dynamically adapted in response to diverse cellular conditions. Current work, applying next generation sequencing and single molecule techniques to T helper cells, has revealed two distinct abundant classes of mRNAs in metazoan cell populations, as well as individual discoveries relevant to T helper cell biology. The balance between T helper cell subtypes is key to infection, autoimmunity and cancer.

Sarah is among the many women who have paved the way for women’s progress in science. In 2010, Sarah was the second woman and the first mother to be honoured with the Biochemical Society’s Colworth Medal since its creation in 1963. Her scientific output has already been recognized (accolades include the EMBO Young Investigator Award 2003, the Shell Science & Technology Woman of the Future Award 2009 and the Lister Research Prize Lecture 2011). Sarah will give the Crick Lecture at the Royal Society in 2012.