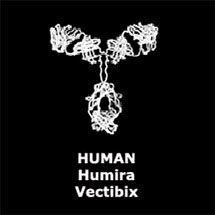 Two therapies with their roots in antibody technology developed in the LMB and the Scripps Research Institute* have recently emerged as promising new drug candidates to treat lupus, a potentially fatal autoimmune disease, and anthrax, a pressing concern due to bioterrorism.

The drug candidates—belimumab (BENLYSTATM, formerly LumphoStat-B®), developed by Human Genome Sciences with GlaxoSmithKine as a treatment for systemic lupus erythematosus and raxibacumab (ABthrax™), developed by Human Genome Sciences as a treatment for inhalation anthrax—demonstrated significant positive results in trials announced earlier this month.

The antibodies were made from combinatorial antibody libraries, a technology developed independently at the LMB and the Scripps Research Institute (see Therapeutic Antibodies). Although the teams from Scripps Research and LMB were scientific competitors in earlier years, they pooled their inventions in Cambridge Antibody Technology (CAT, now MedImmune, part of AstraZeneca) to facilitate exploitation of the technology.

Humira®; the first human antibody to be approved by the FDA (2002) was developed by CAT and BASF Pharma (now part of Abbott). CAT was also responsible for the first stages of development of belimumab and raxibacumab (with Human Genome Sciences) and ABT-874 (with BASF Pharma, against IL12/23 and in phase III trials for treatment of psoriasis, see http://www.abbott.com). These three antibodies appear to the most advanced of a stream of human antibodies derived from combinatorial libraries that are currently in clinical development.

If approved, belimumab would become the first new drug treatment for lupus in 50 years.

Systemic lupus erythematosus is a chronic, life-threatening inflammatory autoimmune disease, caused by multiple genetic, environmental, and other factors, most of which are unknown. Approximately five million people worldwide, including about 1.5 million in the United States, suffer from various forms of lupus, including systemic lupus erythematosus. Lupus can occur at any age, but first appears largely in 15- to 45-year-olds, about 90 percent of whom are women. Symptoms can include debilitating fatigue, painful and swollen joints, fever, skin rash, and kidney problems. The disease can also lead to arthritis, kidney failure, heart and lung inflammation, central nervous system abnormalities, inflammation of the blood vessels, and blood disorders.

Lupus occurs when a person’s own B cells produce antibodies that become “autoantibodies” directed against “self” tissue instead of foreign pathogens. Belimumab works by recognizing and inhibiting the biological activity of B-lymphocyte stimulator (BLyS), a naturally occurring protein discovered by Human Genome Sciences that is required for B-lymphocyte cells to mature into antibody-producing Plasma B cells. Elevated levels of B-lymphocyte stimulator have been associated with autoantibodies in lupus and certain other autoimmune diseases.

In a 52-week Phase 3 clinical study announced on July 20, 2009, patients with active systemic lupus erythematosus taking belimumab showed statistically significant improvements in their condition over patients taking a placebo. Human Genome Sciences and GlaxoSmithKline are currently conducting a second Phase 3 trial of belimumab, and assuming positive results in November 2009, plan to submit marketing applications in the first half of 2010.

A Response to the Threat of Terrorism from Anthrax

Raxibacumab is the result of a collaboration between Human Genome Sciences and the U.S. government as part of Project Bioshield, a component of the country’s national defense strategy, as anthrax has the potential to be used as a biological weapon.

Anthrax is a naturally occurring deadly disease that is caused by infection with the bacterium Bacillus anthracis. B. anthracis forms spores when conditions are not right for the bacterium to replicate. When it converts into a spore, it can lie dormant inside its protective, almost indestructible protein coat. When spores of anthrax are breathed in, however, they are taken up through the lungs and transported to other parts of the body, where they germinate into bacteria that begin reproducing and making toxins.

Exposure to anthrax can be treated with antibiotics, but the effectiveness of antibiotics diminishes over time. If the exposure is not detected quickly enough, antibiotics alone may not be able to save the patient. This is because B. anthracis produces a virulent toxin that kills cells and, in high enough doses, can kill infected people.

Raxibacumab represents a new way to address the anthrax threat. Instead of destroying the bacteria as antibiotics do, the compound targets the toxins after they have been released by the bacteria into the blood and tissues, ultimately preventing the toxins from entering and killing cells.

On July 9, 2009, the New England Journal of Medicine published the results of two animal studies on raxibacumab that point to its life-saving potential. The research showed that 64 percent of monkeys and 44 percent of rabbits receiving the compound demonstrated increased survival rates compared with the placebo group. Since the results’ publication, the U.S. government has placed its second order for raxibacumab, which will be included in the U.S. Strategic National Stockpile.

* written in conjunction with Mika Ono of the Scripps Research Institute.