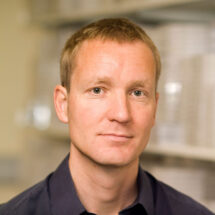 Jan joined the LMB in 1996, as an EMBO Long-Term Fellow and became a Group Leader in 1998.  His group focuses on the structure and function of key proteins in the cytoskeleton of bacteria and archaea, using tools of modern cell and structural biology. Among the molecules he is studying, many of which act as filament-driven motors, are the complex structures involved in prokaryotic cell division and DNA segregation.

Before joining the LMB, Jan completed his PhD at the Max-Planck Institute in Martinsried with Robert Huber.  He won a Leverhulme Prize for Biochemistry in 2002, the EMBO Gold Medal in 2007 and was elected a Fellow of the Royal Society in 2008 and of Germany’s National Academy Leopoldina in 2013. Jan was appointed as Joint Head of the Structural Studies Division in 2010 and he became Deputy Director of the LMB in 2016.

Jan was selected after a competitive international search by the MRC and will begin his new role in spring 2018.  He will take over from Hugh Pelham who retires after 12 very successful years in charge.

Hugh commented, “I am delighted to be handing over the Directorship to Jan.  He has been an outstanding leader of the Structural Studies Division, and has a deep appreciation of what makes LMB work so well.  I am sure that under his guidance the LMB will continue to flourish, producing new and exciting science and ever more achievements.”

Jan added, “Not in my wildest dreams would I have thought in 1996 that I would be one day the director of this great institute. Being given such an important job makes me feel both excited and humbled. I will aim to protect LMB’s very special culture and people, so that new ideas keep the LMB at the forefront of molecular biology, where it belongs.”

Jan joins an illustrious list of Directors of the LMB, following in the footsteps of Max Perutz, Sydney Brenner, Aaron Klug and Richard Henderson.