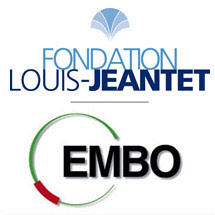 The inaugural Louis-Jeantet Foundation Young Investigator Career Awardee was chosen from holders of the European Research Council (ERC) Starting Independent Research Grants. Jason was awarded an ERC grant in 2007, when the success rate was 3.2 percent. The Young Investigator Award consists of CHF 425 000 to fund a three to five year research project.

This award will allow Jason to extend his pioneering work on reprogramming the genetic code into new areas. Jason’s work allows designer amino acids to be encoded at specific, predetermined positions in proteins in vivo, enabling molecular biologists to control and elucidate the functions of proteins in cells with unprecedented precision.

Jason will officially collect his prize at the Awards Ceremony in Geneva, on April 14th 2011.

In addition to this award, Jason has also been elected into the membership of EMBO. He joins a membership of almost 1500 of the world’s leading molecular biologists who have been recognized for their outstanding research contributions.