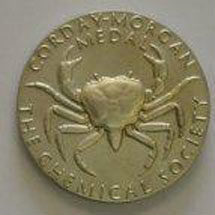 Jason Chin has won the Royal Society of Chemistry’s 2010 Corday-Morgan Prize. The award was made in recognition of Jason’s “pioneering work on genetically encoding the synthesis of novel polymers in cells through development of methods to incorporate, for example, new amino acids”.

The Corday-Morgan Prize is a prestigious award that has been made annually since 1949 for the most meritorious contributions to chemistry. The list of previous winners includes LMB alumnus Fred Sanger (1951).

After completing a postdoc at the Scripps Research Institute in California, Jason moved to LMB to start his own group in 2003. He was elected as an EMBO Young Investigator in 2005, gave the Royal Society Francis Crick Prize Lecture in 2009, and was awarded the EMBO Gold Medal in May 2010. The RSC Corday-Morgan prize is further recognition of Jason’s scientific output.
Jason will receive the Corday-Morgan Prize award and medal at the RSC Awards Presentation evening on Friday 12 November 2010.