John Kendrick-Jones, LMB emeritus scientist from the Structural Studies Division, and David Komander, from the LMB’s PNAC Division, have been named in the European Molecular Biology Organization (EMBO) list of new members announced on 7th May 2014.

EMBO elects new members annually on the basis of scientific excellence and outstanding research contributions, and EMBO membership is a lifetime honour.

This year is the 50th anniversary of EMBO, which supports talented researchers, stimulates the exchange of scientific information, and helps build a research environment in Europe where scientists can achieve their best work. With this prestigious membership Jake and David join over 1600 leading researchers. 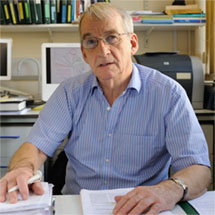 John Kendrick-Jones (Jake), who joined the LMB in 1970, is studying multifunctional myosin motors. Myosins are present in in every eukaryotic cell and are a key component in contractile muscle. While investigating how muscle contraction is regulated, Jake discovered small protein subunits called regulatory light chains, which control myosin II motor function and filament assembly. More recently, Jake identified a number of new classes of multifunctional myosins that are involved in a diverse range of cellular transport pathways. His current research is focused on characterising the biophysical properties and cellular functions of myosins in class VI in sufficient detail as to understand how defects in this myosin are linked to disorders such as deafness, neurodegeneration, cardiomyopathy and prostate cancer. 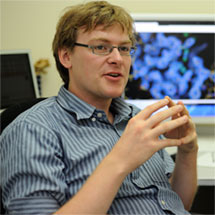 David’s research focuses on protein ubiquitination, a key mechanism that regulates many processes within the cell including protein degradation, cell signalling and protein trafficking. Ubiquitin can form polymers of at least eight different types of poly-ubiquitin chains, which are used by the cell as regulatory markers. David’s group are trying to understand how proteins in the cell can distinguish between the different forms of ubiquitin chains, and how different ubiquitin chains regulate cellular processes. Enzymes called deubiquitinases remove ubiquitin subunits, and many of these are highly specific for particular types of chains. Deubiquitinase specificity is implicated in cancer and infectious diseases and these enzymes are future drug targets.  David is already an EMBO Young Investigator, and in 2012 received a Lister Institute Research Prize.