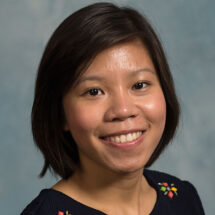 Thi Hoang Duong (Kelly) Nguyen from the LMB’s Structural Studies Division has won the prestigious Biochemical Society Early Career Research Award 2017 for Genes, for her contribution to our understanding of the architecture and activation mechanism of the splicesome.

The Biochemical Society exists to advance molecular and cellular biosciences, and with over 6000 members, is the largest discipline-based learned society in the biosciences. The Early Career Research Awards recognise the impact of research carried out by young scientists across the Society’s different Theme Panels.

Kelly joined the LMB as a PhD Student in October 2010, working in Kiyoshi Nagai’s group, and has been a postdoctoral researcher since 2014. Kiyoshi’s group is studying the spliceosome, a macromolecular machine involved in the maturation of messenger RNAs for protein synthesis. Malfunction of this machine is implicated in diseases such as the degenerative eye disease retinitis pigmentosa, and some forms of cancer.

Following her PhD, Kelly initiated her cryo-EM analysis of spliceosomal complexes. The major components of the spliceosome are five small nuclear ribonucleoprotein particles (U1, U2, U4/U6 and U5 snRNPs). Kelly obtained the cryo-EM map of a spliceosomal complex, which revealed for the first time how the protein and RNA components interact with each other to build this molecular machine, providing important insight into the mechanism of spliceosomal activation. She has recently jointly first-authored, with her LMB colleague Wojciech Galej, a paper in Nature, which revealed in unprecedented detail the structure of a large part of the spliceosome, producing an accurate three-dimensional picture of an RNA-protein complex called the U4/U6.U5 tri-snRNP.

Kelly, who recently left the LMB to become a Miller Research Fellow at HHMI University of California Berkeley, will receive her prize medal and present an award lecture at a Biochemical Society Conference in 2017.