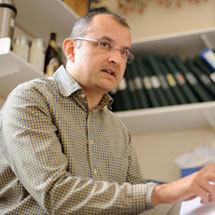 KJ Patel gave the 98th Christian A. Herter Lecture at the New York University School of Medicine. The lecture, entitled “The genetic basis of protection against genotoxic metabolites in mammals”, was given on Thursday 8th May 2014.

The lectures, established in 1903, have previously been given by some of the most illustrious members of the scientific community, such as Nobel Prize laureates Elizabeth Blackburn, Paul Greengard and Gunter Blobel. KJ is the first Cambridge based scientist to be invited to give the lecture since F. Gowland Hopkins in 1921.

KJ’s work has shed new insight into how toxins released from metabolism damage the DNA of stem cells, particularly in those that produce blood. Studies carried out by his laboratory have uncovered how the body protects against these toxic metabolites through a dual protection mechanism involving degradation of these metabolites and a specific form of DNA repair (the Fanconi Anaemia DNA repair pathway). A coincidence of these discoveries has been to elucidate how the toxic by-product of alcohol metabolism, a chemical called acetaldehyde, damages DNA and may contribute to diseases associated with ethanol abuse (foetal alcohol syndrome and certain common cancers).

The lecture is named after Christian Archibald Herter who was born in Glenville, Connecticut in 1865. He received a medical degree and initially practised mainly neurological medicine in New York City. He gave up medical practice to build his own laboratory on the fourth floor of his house. He was commissioned by President Theodore Roosevelt to examine the possible effects of sodium benzoate as a food preservative, which he found to be safe. He became Professor of Pharmacology and Therapeutics at the College of Physicians and Surgeons at Columbia University in 1903. It was during this time that his work on coeliac disease, which he called “intestinal infantilism”, led to the eponym Gee-Herter disease. His most important contribution was that he highlighted the retarded growth of affected children. Herter co-founded and edited the Journal of Biological Chemistry in 1905 with John Jacob Abel, and established the Lectureship as a memorial to his second son Albert who had died in 1902. Herter died in 1910 at the age of 45 of a neurological wasting disease.