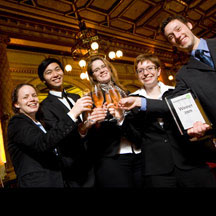 Lizzy’s team competed with 13 other teams, each of which had to present a fictitious product for a real market, and pitch it to a panel of potential investors. Products had to be based on plausible rather than actual science, with judges looking for the team with the best entrepreneurial skills. The Cambridge-led team triumphed after two rounds of gruelling Dragons’ Den-style competition, culminating in a nail-biting head-to-head final against the University of Durham. Their hypothetical company, Gluten Replacement Technologies Ltd, which produces an imaginary product called GlutaSafe, a cheap, non-allergenic gluten replacement, finally made it through.

According to Lizzy Day, ‘managing director’ of Gluten Replacement Technologies: “The imaginary product had to solve a real problem. We all know someone with coeliac disease, so we came up with a hypothetical cheap, non-allergenic gluten replacement that could be widely used in food manufacturing.”

Before pitching to the dragons, the teams spent two days with leading biotech figures learning about technology transfer and how to commercialise bioscience ideas. Teams then put this knowledge into place by pitching their business plan to potential investors on day three.
Lizzy puts the win down to teamwork and their ability to get to grips with finance and business planning: “Like Dragons’ Den there were five judges and the finance experts scared us most, because that was most unfamiliar.” “They were looking for realism – how much money you were seeking to raise and your business plan for getting the product to market. Our pitch was realistic and we worked really well as a team. The team is really important, because it’s the team they invest in.”, she added.

Team members Fan Cheng, Lizzy Day, Harry Harris, Sarah Leigh-Brown and Daniel Naujoks all began their careers together as undergraduates in the University of Cambridge Department of Genetics. Fan, Lizzy, Harry and Sarah have stayed on at Cambridge for postgraduate study, while Daniel has moved to Imperial College London. All are working towards a PhD. By winning the title, they bagged a £1000 prize money, tickets to the Bioindustry Association (BIA) gala dinner and the chance to present their hypothetical product at the Rice Business Plan Competition in Houston, Texas.

“It was a huge adventure and it’s taught us that business – especially being an entrepreneur – can be just as exciting as science. It’s an impressive competition, so I hope our win encourages other PhD students from Cambridge to enter next year. It’s a great way to stretch yourself and to stand out,” says Lizzy Day.

Science and Innovation Minister Lord Drayson said: “Congratulations to Gluten Replacement Technologies Ltd. The UK leads the world in bioscience research, so winning Biotechnology YES means overcoming stiff competition. I hope these young scientists go on to successful careers in which they exploit the full promise of their research”.

Biotechnology YES is organised jointly by the Biotechnology and Biological Sciences Research Council (BBSRC) and the University of Nottingham Institute for Enterprise and Innovation (UNIEI) and is backed by some of the biggest names in the biotechnology, pharmaceutical and research sectors. Since its inception 11 years ago nearly 1,500 researchers have taken part.