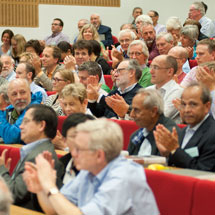 The LMB welcomed nearly 600 of its alumni back to a two-day symposium, ‘Molecular Biology at 50 and Beyond’, held in its new building, on 11th and 12th July. Along with current group leaders, they gathered for a mixture of talks covering scientific, historical and forward looking topics, by current LMB group leaders and past members of the LMB

LMB Alumni are spread across the world, and are at varying stages of their career: from former PhD students and postdocs, who have gone on to be group leaders, to former scientific staff who are now leaders in their field, in academic research, medicine and biotechnology. Amongst the guests were six Nobel Laureates, including Michael Levitt (2013 Nobel Prize for Chemistry), Venki Ramakrishnan and Tom Steitz (2009 Nobel Prize for Chemistry).

The focus of the talks was the next 50 years of molecular biology. All four of the LMB Divisions were represented, and the talks included topics such as the recent advances in cryo-EM structure determination, neuronal plasticity, new insights into aneuploidy in mammalian oocytes and origins of life systems chemistry. 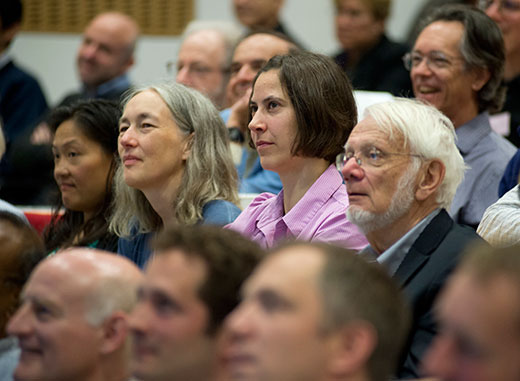 The event presented a rare opportunity to bring together so many scientists who have been trained and influenced by one of the most successful research laboratories in the world.

“The highlights were the opportunity to renew old friendships, hear some amazing scientific stories outside of my current area of research, see how others are applying new technologies to old problems and be part of such a wonderful place again” Julie Tucker, LMB Alumna.

“We were delighted to welcome back so many of our Alumni, on whose work the reputation of the LMB has been built. It was a great opportunity to renew contacts, see old friends, tell them what we are doing and show them the new LMB building in which future generations will make their mark.” Hugh Pelham, LMB Director.

The event was sponsored by the Agouron Institute and the Max Perutz Fund. 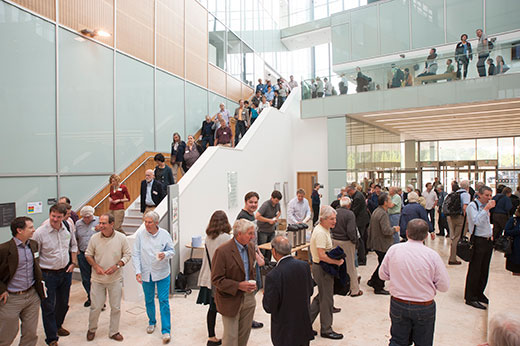