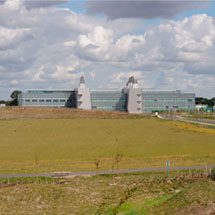 The MRC Laboratory of Molecular Biology and AstraZeneca are today announcing a plan for a research fund to facilitate collaboration between LMB and AstraZeneca and MedImmune.  The fund will support a range of pre-clinical research projects aimed at better understanding fundamental biology and disease.

Under the planned collaboration, the MRC LMB and AstraZeneca would also share knowledge and technologies as part of the potential agreement, which would see AstraZeneca contribute up to approximately £6 million ($10 million) and MRC LMB up to approximately £3 million ($5 million) over a period of five years, as well as in-kind scientific input. Decisions on which projects will receive support from the Fund will be made jointly by MRC LMB and AstraZeneca.

Hugh Pelham, Director of the LMB, said: “This is a very exciting opportunity, in which AstraZeneca and the LMB would be able to share knowledge and resources to better understand the fundamental processes that underlie normal function and disease. The creation of a joint fund would further strengthen our existing and long standing relationship with AstraZeneca, allowing our scientists to work together, sharing ideas and expertise for the benefit of patients.”

Menelas Pangalos, Executive Vice President of Innovative Medicines and Early Development at AstraZeneca, said: “The aim of this joint fund will be to encourage truly innovative scientific thinking. We want to enable and encourage our scientists to push the boundaries of science, on the door step of our Cambridge headquarters, with one of the best scientific institutions in the world.”

Projects are likely to involve scientists from the two organisations working side by side, either within the LMB building, on the Cambridge Biomedical Campus, or in the AstraZeneca research facilities. Projects supported by the fund would not be specifically targeted towards drug development but would feed into the existing research and development activities of the two organisations, with the results published in peer reviewed journals.