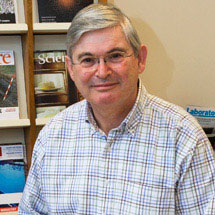 A pioneering MRC research unit in Cambridge focused on the structure, stability and activity of proteins and the engineering of antibodies is closing after 20 years of existence. The MRC Centre for Protein Engineering (CPE) closes its doors at the end of September, following the retirement of its Director, Professor Sir Alan Fersht. However, it is not the end of the road for CPE’s research programmes and facilities as most CPE staff and much of the infrastructure are being incorporated into the LMB.

CPE, established in 1990, was one of the MRC’s first Interdisciplinary Research Centres and also one of the first laboratories to bring together molecular biology, molecular genetics, biophysics and structural biology into one cohesive unit. It was formed around the research of the two scientists who invented protein engineering: Director Sir Alan Fersht and Deputy Director Sir Greg Winter, both of whom have been knighted in recognition of their work.

Over the past two decades CPE has been extremely successful, both academically and commercially. All of Alan’s work on protein folding and much of Greg’s pioneering work to humanise antibodies was carried out at CPE, which has since generated substantial income for the MRC. This has more than covered the cost for funding CPE research for over 20 years as well as paying towards the new LMB building.

The early group leaders are now all well-established scientists. Alumni of CPE include Professor Jane Clarke and Dr’s Paul Barker and Sophie Jackson who are all staff at the University of Cambridge Chemistry Department. Drs Roger Williams, Olga Perisic, Leo James and Phil Holliger all migrated from CPE to the LMB as have the SCOP team led by Dr Alexey Murzin.
Alan will continue to lead his research on the p53 tumour suppressor protein at the LMB with an MRC programme grant for the next five years. Reflecting on his time in charge of CPE, Alan said: “My work has always been funded by the MRC. First as a group leader at LMB, then as a programme grantholder at Imperial College and then as Director of an MRC unit and interdisciplinary research centre. The MRC has been by far the most important factor in my success as a research scientist and I am immensely proud of running a very successful MRC unit and helping to train so many scientists of the next generations. If I had my life again, I would do exactly the same thing.”

Imperial College Press is publishing a book to coincide with the closure of CPE, which includes reminiscences and photographs of CPE staff interwoven with the science. The Selected Papers of Sir Alan Fersht – Development of Protein Engineering is edited by Alan Fersht and Qinghua Wang.