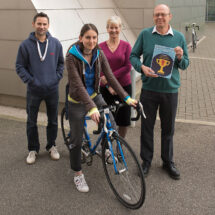 LMB cyclists have ridden to the top of the leader board in this year’s Cycle September Challenge, a fun, free National competition, organised by Love to Ride, to see which workplaces can get the most people riding.

During the month-long challenge, 179 members of the LMB collectively cycled on 3,677 occasions covering a distance of 19,643 miles. This amazing achievement resulted in the LMB finishing as winners of the 500 – 1999 staff category with 78,720 points, almost 30,000 more than the previous year.

This year 20,300 people from 3,000 workplaces across the UK took part in the Challenge. In addition to competition between workplaces, individual achievements were recorded in leader boards. Geoff Wilkinson was once more the LMB’s top distance cyclist having contributed an astonishing 944 miles to the overall tally, closely followed by Wayne Rednall with 926 miles and Greg Darley with 876. Lorraine Weise was the top lady distance rider, cycling 322 miles and Peggy Paschke took 2nd place nationally in the ‘Top Commuter’ challenge having cycled to work every single day of the month.

As winners of the 500 – 1999 staff category the LMB has won a Bike Wash Station from Cyclehoop, which will shortly be available for members of staff to use. The bike wash facility will complement the deluxe repair station won by the LMB in the 2016 National Cycling Challenge.

This year’s Cycle September challenge was the main #YearoftheBike event organised by Love to Ride as part of the bicycle’s 200th birthday celebrations. A series of events are taking place throughout 2017 to get more people cycling.

Love to Ride Cambridgeshire – 2017 Cycle September results
Cyclehoop: MRC Laboratory of Molecular Biology tell us how much they Love to Ride (2016 competition)